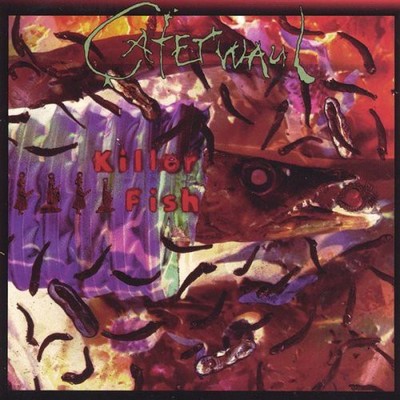 Contrary to their name, Phoenix natives Caterwaul purveyed the sort of pleasant, upbeat, R.E.M.-ish folk-rock that could be found on many collegiate radio stations in the 1980s, with touches of U2 guitar atmospherics thrown in for good measure. Vocalist/lyricist/mandolin player Betsy Martin led the quartet, which also included guitarist Mark Schafer, drummer Kevin Pinnt, and bassist Fred Cross. The group released a debut on Lost Arts in 1987, entitled The Nature of Things; they subsequently moved to Los Angeles and landed a deal with IRS. Their first full-length for the new label, Pin Web, appeared in 1989; the CD version appended the previous year's Beholden EP. Martin's impressive vocal acrobatics had come to dominate the group's sound, and 1990's Portent Hue proved to be one of her finest showcases. However, Caterwaul then ran into difficulty, as the Killer Fish album-recorded in 1991 with new bassist Kelly Castro and additional guitarist Stuart Smith-languished on the shelves for over five years. Lost Arts eventually acquired the rights to the album and finally issued it in 1996. -- Steve Huey, All Music Guide Killer Fish is a very interesting and distinctive-sounding effort by the LA-based band CATERWAUL. The band consists of Betsy Martin on vocals, Mark Schafer on guitar, Kevin Pinnt on drums, Kelly Castro on bass, and Stuart Smith on rhythm guitar. The band utilizes a wide array of sounds and styles that range from one extreme to the other. Some songs feature funky rhythms, grungy guitars and wailing vocals, while others have an acoustic, folk-based sound around Betsy's beautiful singing. Regardless of the style, the main focus is always on Martin's distinctive voice. Whether singing an an aggressive rocker or a gentle ballad, she leaves her unique stamp on the song. Her wailing and sudden leaps into the upper register of her voice are somewhat reminiscent of Bjork. On 'Flower Song,' 'Kiss The World,' and 'Melancholy Holler,' Martin's wailing vocals are backed by funky rhythms and grungy guitars. 'Silly' is a gentle and reflective rock ballad, with Betsy's voice being backed by echo-laden guitar. On 'Naked Soul,' Martin's vocals are at their most ethereal and ghostly, as she trips through the upper register of her vocal range. 'Steadfast Chains Of Love' features a rocking beat and strong refrain. 'Dozens Of Roses' is a gorgeous acoustic number that shows a strong British folk influence. In a similar vein, the band turns in an excellent cover of Donovan's 'The River Song.' There is plenty of excellent material on this album and the band certainly has a unique and distinctive approach. --Geoff Cabin / Rock Beat International.

Here's what you say about
Caterwaul - Killer Fish.