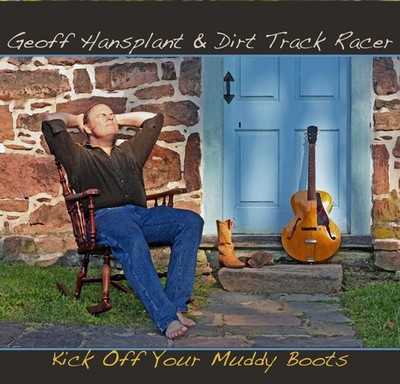 Geoff Hansplant & Dirt Track Racer's new album, Kick Off Your Muddy Boots, reaches the listener simultaneously through the feet and ears, making a bee-line for the heart. Blending traditional forms of Americana with latin rhythms, jazz voicings, classical strings and Piedmont style guitar, Dirt Track Racer creates an irresistible groove and weaves upon it stories of loves found, lost, yearned for, mourned over and kicked to the curb. Perhaps it is the intergenerational nature of the band, or the fact that the individual members' influences embrace so many different genres, but their sound is definitely their own. Geoff Hansplant handles most of the vocals and lays down intricate Piedmont style Country blues licks and riffs on his favorite Lowden guitar and some electric work on his old Gretsch Tennessean. Paul Deck handles all of the percussion, switching effortlessly between jazz, rock, blues, Latin and N'awlins second line styles. Nick Terramani shapes the underlying harmonies on both electric and upright bass and Julie Myers does the rest, be it jazz violin, grand piano, Hammond B3 or vocals. Their new set starts with the invitational, "Kick Off Your Muddy Boots," a rollicking, foot stomping number driven by Geoff's intricately woven guitar and Paul's Latin rhythm, while Julie's sinuous B3 glues it together. A stripped down and open feel of acoustic guitar, violin and congas sets the groove for "Delilah," while Nick's upright bass adds a rich underpinning to this modern take on the original obsessive love story. Latin percussion and Julie's jazz violin accentuate the otherwise bluesy "Already Gone," creating an almost acoustic Santana experience, "Twilight Train" and, later, "Rain in My Coffee" relate haunting tales of lives and loves lost while "Bucket Full of Rain" rises up and delivers the Americana goods with an unmistakable 1960's Memphis soul groove. Paul's second line drumming kicks "Dead Man's Shoes" into gear and drives it against Geoff's deft guitar and Julie's Bayou bluesy violin. The Piedmont blues gets a new jazz groove on "Eliza Jane," Geoff's song of love for the mystery that is all women. "Traces of Caroline" offers another, darker view of obsessive love that is a smoky, bluesy excursion that might not be out of place in a Ray Charles set and features Julie's six part harmony backing vocal, our own version of the Rayettes. "I Ain't Sayin'" tells the story of the lingering effects of a love gone south with an insistent sexy drive that is the hallmark of Dirt Track Racer. Then, the softest song on the album, "Fool Enough To Fall In Love," sets the stage for getting back into that same ol' can of worms. The album proper ends with a song of hope for the power of love, "From This Moment On," featuring Julie and Geoff in a vocal and instrumental duet while Paul and Nick rock the groove. As a bonus track, we have added a Christmas song called "Home For Christmas," a bossa nova sounding duet between Geoff and Julie with just a hint of Getz / Gilberto Thank you for spending some time with Dirt Track Racer, getting to know us and our music. We hope you'll agree that this ain't yer old man's Americana. We sweat the details musically and lyrically and the results speak for themselves. This is music to move your body and move your mind. Peace Geoff, Julie, Paul and Nick.

Here's what you say about
Geoff Hansplant & Dirt Track Racer - Kick Off Your Muddy Boots.