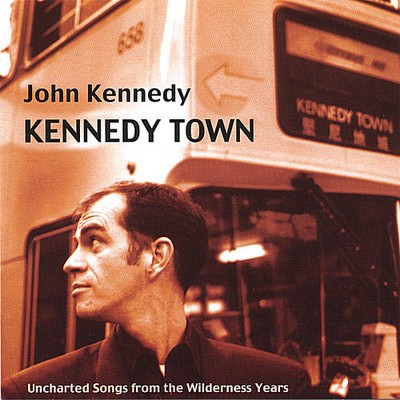 John Kennedy the musician, was a five year old in Liverpool the day the President died. In Australia at the age of ten, he took the confirmation name of Francis to complete the famous 'J.F.K.' moniker. It seemed like a good idea at the time. The joke has long since worn off for him, but it still takes some explaining. A young enthusiastic journalist once described John Kennedy as a humble genius. Kennedy is neither a genius nor particularly humble. He is the writer of many fine songs using a collection of pop, country, folk and rock influences to create the hydrid style he calls Urban and Western. Kennedy formed his first band in Brisbane, Australia in ´80. His family had migrated from England in the mid-´6o's and he was raised in the suburban wastelands on a diet of radio pop music. At the beginning of the 80´s, Kennedy brought his pop melodies and ideas to the flourishing post-punk Australian indie music scene. His name alone should have brought him commercial success. It didn´t, but he continued to release a series of successful independent records. The penchant for funny names continued with his first band 'J.F.K. and the Cuban Crisis'. 'The Crisis' and his mid-80's Sydney band 'John Kennedy's Love Gone Wrong' became self-fulfilling prophecies. An invitation to perform at the inaugural Berlin Independence Days independent music conference in ´88 provided the incentive to leave Australia. In Berlin in the early '90's, Kennedy tried a more positive approach and formed 'John Kennedy and the Honeymooners'. Despite the optimism, the honeymoon ended and Kennedy went on to perform as a solo act. Since Berlin he has lived and made music in Hong Kong, Holland and London; living by the motto "Have Songs, Will Travel". Kennedy returned to Sydney at the start of the new millenium, has a new band, album and label and lives once again in Sydney's inner-western suburbs. Kennedy Town Could John Kennedy be the Johnny Farnham of Australian independent music? In the 20 years Kennedy has been on the Australian music scene, he's found himself to be, as Dave Warner once described in song, 'too hip for the straights, too straight for the hips'. Lacking the rock cred of Paul Kelly or Kasey Chambers' 'bright young thing' tag, he has kept on doing what he does best: writing great songs of travel and heartache and delivering them in his big, soulful voice. Kennedy's latest album, Kennedy Town follows the 2002's Inner West retrospective CD on Laughing Outlaw Records and shows the many ways he has developed his talents as a writer and singer during his absence from Australia during the 1990's. Recorded in Berlin with the core of his German band The Honeymooners, the album contains pop postcards aplenty from Kennedy's travels around the globe. It celebrates the mixture of pop, country, folk and rock that he has made his trademark urban and western sound. Subtitled 'Uncharted Songs From the Wilderness Years', Kennedy Town opens with The Ghost of Newtown in which Kennedy goes back to his beloved King Street to find if there is still some sense of belonging there for him and concludes with No Place To Go Home To where he discovers that home is anywhere you hang your heart. In between, the songs Liverpool Lullaby, Ich Bin Ein Berliner, Union Town, Brisbane '82 and I Like Hong Kong show that like George Lazemby, Kennedy is a true Australian International. Unlike George, he has brought depth as well as distance to his journey. Once described as sounding too similar to Elvis Costello, John Kennedy today now has more in common with The King; no, not the other Elvis, but the Australia's King of Pop Johnny Farnham. Like Farnsey, Kennedy is no contender in the Tex Perkins cred stakes but he can lay claim to being The Voice of Australian Indie Pop. Could John Kennedy be the Johnny Farnham of Australian independent music? Only time and the retirement of Tex Perkins from the Cruel Sea will tell.

Here's what you say about
John Kennedy - Kennedy Town.