Meshelle - Keep Laughing with Me 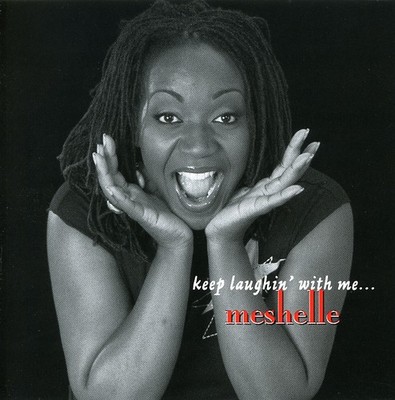 Comedy, as Lewis Black pointed out in his recent New York Times magazine article, "is a matter of having a perspective." While this may sound simple, the unique voice that makes a comic stand out amongst the crowd is usually the unqualified perspective of the performer. In this case, Meshelle, the latest addition to the Morphius Records roster of distributed comedians, has all the essentials to succeed. From working the extreme differences between black and white culture, Christianity and paganism, brothers and terrorism, Meshelle filters natural strains of comedic insight into the vast cultural divides of the American landscape. Performing with both wit and character, Foreman's ability to bring her considerable acting skills into the mix has garnered her successful appearances on the BET's Comic View, the African American Woman Tour, the NAACP's Image Awards, and Heart and Soul. She recently appeared in a two-week engagement in Washington, DC to sold-out performances of her one-woman show "Nervosis" at the H Street Playhouse, where Meshelle portrayed over 20 characters to critical acclaim from the Washington Post and the Washington City Paper. Now on the nationwide Pantene Tour, sponsored by BET and Essence magazine, and co-billed with MC Lyte, Yolanda Adams, and Regina Bell, Meshelle is poised to build on her well-deserved reputation and secure her place among the future national stars of comedy.

Here's what you say about
Meshelle - Keep Laughing with Me.