Emily Cavanagh - Keep It with Mine 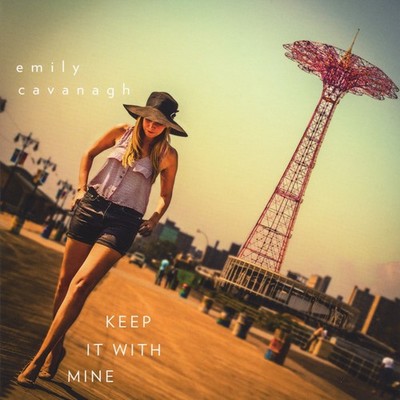 Somehow in this world, there occasionally surfaces an instrument of expression that is so clear, so passionate and universal, that it resonates with the human heart. An instrument: this time around, a voice. And this voice belongs to Emily Cavanagh. Social worker by day, songbird by night, Cavanagh bridges worlds with the healing power of music. Music-as-a means of healing is an idea that permeates and informs most of Cavanagh's life. A working musician in New York City, Cavanagh has recorded three records to date and played countless shows with some of the city's finest musicians. When not playing her craft in the city of dreams, Cavanagh runs a Creative Arts program for a non-profit serving formerly homeless young adults in the South Bronx. Advocating art and expression as the saving grace they've been for her, she's inspired many of her clients through the years to write their own music ("Music gives a voice to people who are often without," says Cavanagh.) And a voice, this girl has. Cavanagh - born to a large Irish family in Chicago and now living amongst the doers and dreamers of Brooklyn - has an ebullient vocal style influenced by the singers of the forty's and fifty's, with a pop sensibility. Her latest record Keep it with Mine is set to release this April. Fundamentally Keep it with Mine comes from the idea that all our stories influence and interlace with each other's. The songs on her new record are relatively minimal and catchy, but behind the light melodies lie concepts that bear substantial weight. "Often, when I have written in the past, it has been a reflection of things going on in my own life, but this record has been more about reflecting on the things going on in other people's," she remarks. Written during a time of loss in the lives of friends, family, and her young clients, Cavanagh drew from such themes as the fleetingness of life, forgiveness, and the idea that things so personal to each of us are universal, connecting us all to one another. Keep It With Mine is a collection of stories; stories of friends, of family, of her own heart. Some are of longing for a place in a time, some are tales of loss and letting go, and waking up to do it all again. Some are just the simplest kind of love songs, the kind that will make you want to tap your feet or hold somebody's hand. Keep It With Mine was recorded and produced by Leo Sidran, (Steve Miller Band, Motorcycle Diaries, Ben Sidran) a talented musician and well respected producer. While Cavanagh has been recording in New York for years, this was the first record where she worked alongside a producer. It seems to have worked out well, as her last two records each took nearly two years to make, while Keep It With Mine took two months start to finish, and was sung for the most part in two days. "I spent the very last day of my twenties singing that record," notes Cavanagh. Sonically, Keep it with Mine builds it bones on rolling piano melodies, acoustic guitars that sway in a breeze, and laid back, in the pocket percussion. Mute handclaps, thoughtful piano chords, plaintive slide guitar and brushed drums form a palette of soft tones that drape themselves around her more somber numbers, like "We Were Young." On more celebratory numbers like "Where Did You Go" and "C'mon Let's Do, " Cavanagh fills in and lifts up the songs with a smooth and strong voice; scuffed just enough around the edges to catch in your ears, singing melodies immediately arresting and more than deep enough to get stuck in your head for days. Cavanagh's music and story have begun to capture the hearts of many in her adoptive hometown of New York City. After just a few years, she boasts a loyal and dedicated fan base; who come to see her at prominent venues such as City Winery, The Hiro Ballroom, Rockwood, and the Living Room. Cavanagh also uses her music to bring awareness to causes close to her heart; she recently performed at The 18th Commemoration of the Genocide in Rwanda at Georgetown University for the Ambassador of Rwanda to the United States. Cavanagh was inspired to write the last song on this new record, "Dark was the Night" in honor of a client of hers who survived the Genocide. Cavanagh has said 'It means a lot to have made a record that I think speaks to the music I want to be making, and that can hopefully connect on a deeper level with people who know the story behind it. Sometimes we have no idea what will move us to create, and even when we think we do, a song can be born from a place that was in us long before we knew it. I hope to make music that can make someone feel something. Even in just the smallest way."

Here's what you say about
Emily Cavanagh - Keep It with Mine.