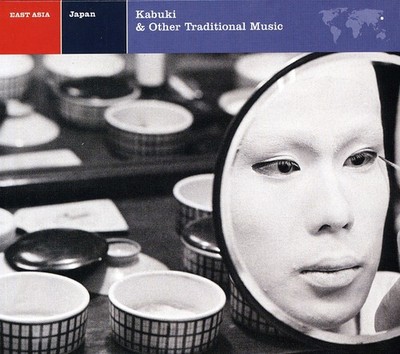 Much as with the art of Japanese cuisine, each element in the performance of this often centuries-old music has symbolic importance, from the type and shape of the instrument being used to the sound of a player's breath before he or she moves on to the next note. Each is an essential part of an exquisite greater whole. The same can be said for this latest reissue of East Asian recordings from the Nonesuch Explorer Series: The austere cover artwork and the historical liner notes in the CD booklet, along with the music itself, form a deep impression of the nature of Kabuki theatre, it's philosophy as well as it's sound. That should come as no surprise to the many fans of the Explorer Series, which has been introducing music from around the globe to adventurous listeners for forty years. This particular edition, Kabuki and Other Traditional Music, is a fascinating companion piece to Shakuhachi: A Bell Ringing in the Empty Sky, reissued this spring. Whereas that disc presented spare, contemplative solo works played by Goro Yamaguchi, the highly dramatic tracks here are performed by the eleven-piece Ensemble Nipponia. The group, which formed in 1964, became known around the world for it's skill at reviving and preserving traditional Japanese repertoire and for it's desire to showcase modern work in a similar mould, employing the same instruments as the musicians who had conjured up these sounds many generations before. These live performances were recorded by Explorer Series producer David Lewiston in October, 1978 at the Academy of Arts and Letters in New York City during Ensemble Nipponia's second American tour. The album's first half consists of excerpts from the naguata ("long song") music that accompanies the dances featured in Kabuki theatre and serves as background music during it's narrative portions. Featured throughout is the shamisen, a three-stringed lute not unlike a banjo; in most of the Kabuki pieces, tailored for the concert hall rather than a theatre, the shamisen is the focus. Listen to "Atsumori," however, adapted from an 800 year-old military epic, and one will also hear an impassioned human voice propelling the action. The final two pieces were composed by Ensemble Nipponia leader Minoru Miki, who, in his writing, combines the traditional with the contemporary and, in the process, creates something timeless.

Here's what you say about
Ensemble Nipponia - Kabuki & Other Traditional Music.