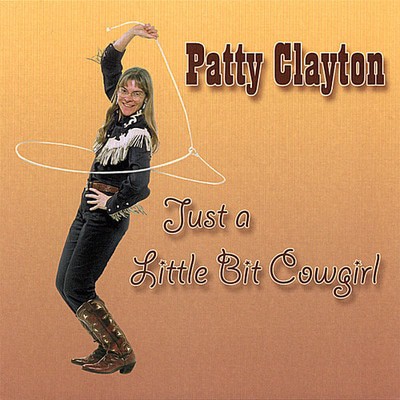 This is the second of three solo recordings by award winning Patty Clayton. Patty is a performing songwriter whose original ballads and "borrowed" songs celebrate the present and yesteryears of the West. She knows her subject well; she was raised in the West, in a family rich with ranching history in the Pacific Northwest. Patty's pure vocals have delighted Western and Folk audiences in a career that has spanned several decades, both as a solo artist, and with her band "Cimarron Wind". She has been eagerly sought to share her wonderful sense of harmony for groups such as Jill Jones and the Lone Star Chorale, duet Liz Masterson and Sean Blackburn, and solo performers like Dave Stamey, Gary McMahan and Juni Fisher. Patty has garnered four nominations for Western Female Vocalist of the Year by the Academy of Western Artists, as well a 2003 Album of the Year nomination for this release, "Just A Little Bit Cowgirl". The Academy of Western Artists named Patty the 2007 Western Female Vocalist of the Year presenting her with the Will Rogers Award on Aug. 7, 2007 in Garland, TX. The Western Music Association also named her 2004 Female Performer of the Year, assuring her a spotlight amongst the West's finest. Here are a few comments from folks who have enjoyed Patty's music: With a voice pure as a prairie wind, Patty Clayton delivers the truth in her straightforward performances of wonderfully written Western music. Her Folk roots are strong, and thankfully very apparent in her distinctive singing and playing style, and her characteristic perfect pitch and gentle touch keep even the most discriminating listener's rapt attention. She's a treasure! Juni Fisher, 2006 WMA Female Performer of the Year 2005 AWA Female Vocalist of the Year Patty Clayton is an artist who blends her love for the traditional, historic West with her passion for the West of today. A great singer, songwriter, and musician, Patty Clayton will take you on musical tours of the rich traditions that make up the American West. She is one of my favorite singer/songwriters mainly because of her love and respect for our heritage and the great people who live it. Jim Wilson, 2003 WMA Traditional Album of the Year Patty Clayton is an engaging performer who packs high energy into an almost delicately muted delivery that bespeaks deep musical maturity. That she is an exceptional singer is recognized immediately; that she may be one of western music's finest songwriters becomes apparent upon hearing only a couple of her original tunes. She will impress you with her expressive vocal style, and her phrasing is exquisite. Her songs are sometimes gritty, often historic, and always beautiful. However, she's no delicate songbird, this one. Patty Clayton is a singer/songwriter who let's you know that she can stand toe-to-toe with the finest artists out there - male or female - and hold her own. Marvin O'Dell, Radio Host for Around the Campfire and Songwriter I have had the honor of performing with Patty Clayton on numerous occasions and she is, without a doubt, one of the finest entertainers in the western entertainment business. Not only is her pure, sweet voice one of the best, but she is also an excellent musician. She has the ability to captivate an audience, whether young or old, as she presents the traditions and history of the West to her audience through her performances. Yvonne Hollenbeck, 2005 AWA Cowgirl Poet of the Year 2006 WMA Cowgirl Poet of the Year 'To bare one's soul in a song is not an easy thing to do. To do it skillfully and with grace is a gift. Songwriter Patty Clayton has that gift and she shares it with all of us in her collections.' Donnie Blanz, Singer/Songwriter Actor "Patty's recordings clearly offers a good variety of songs bringing the spirit of todays West as well as yesteryear directly to your soul." Graham Lees, Host Western Hour Radio Show 'Patty is not only a majestic singer, she's an admirable writer...From the heart, honest, inspirational, distinguished, excellent...a superb performance!' Bob Everhart, National Traditional Country Music Assoc. Iowa 'Her original material stands strongly among the songs penned by others and offers the listener a clear vision of the images, rhythms and melodies that move Patty Clayton the storyteller and songstress.' Stew Levett, Black Rose Acoustic Music Society, Colorado 'Fantastic, fresh and expressive voice! Patty's songs are simply pieces of art...with just a few words she evokes images with deep emotions.' Gianluca Sitta, Country News, Italy 'Patty's love of folk music is evident in her writing and her delivery...Montana's Yesterday is especially lovely.' O. J. Sikes, Western Music Association's Advocate, Arizona "Cowgirl Easy Listening" Darrell Arnold, Cowboy Magazine.

Here's what you say about
Patty Clayton - Just a Little Bit Cowgirl.