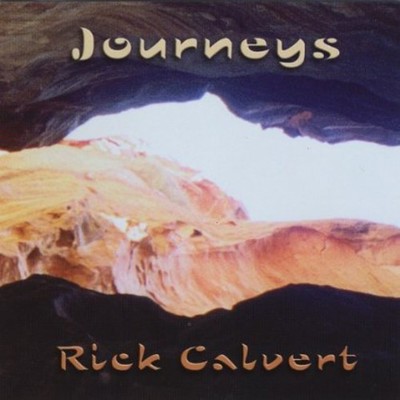 Rick Calvert has been an active folk musician / performer since the late 1960s, and turned his talents to composing modern settings for liturgical text in 1997. His compositions and performances reveal his dual musical roots of folk/rock and choral work. His music caught the attention of renowned producer Fran Avni at CAJE 24 (Conference on Alternatives in Jewish Education) in San Antonio (1998), leading to his Journeys CD recording project. Rick has taught music at the Temple Beth Tikvah Religious School (Madison, CT) since 1986, where he has also served as cantorial soloist. Rick's debut CD, Journeys, released in October, 2000, is an inspirational collection of original, contemporary settings for familiar blessings, Sabbath liturgy, and ethical writings. Of this collection, Cantor Ellen Dreskin (Associate Dean, Hebrew Union College) writes, 'One never tires of Rick's warm melodies and intricate harmonies. His treatment of the texts is both exhilarating and inspiring.' Rick's Yis-m'chu was selected for inclusion on Celebrate Shabbat, a collection of exemplary Shabbat music produced by noted contemporary composer / performer / producer Craig Taubman, also released in late 2000. Rick's newly composed melody for the Shehecheyanu was selected for use at the 2001 Ordination ceremony for cantors and rabbis at Hebrew Union College in New York. Rick has performed extensively in the New York / New Jersey / Connecticut area. He has a growing national reputation, leading to a broader range of performing around the country. He has been a featured evening performer at CAJE since 1999. Here's what others are saying about Rick's music. Ø 'Journeys' is just the right mix of upbeat and contemplative melodies. . . . These are not your usual 'Oseh Shalom', 'Lecha Dodi', 'dime-a-dozen' melodies, but texts often neglected by songwriters. Several selections from Pirke Avot, Psalms and the liturgy provide wonderful new melodies with which to sing them. . . . Rick masterfully weaves his harmonic layers in and out, giving and taking and reeling you in to the luscious sounds of his music. - Judy Caplan Ginsburgh, January, 2001 Ø Rick is a truly original composer, with impeccable taste. His album is filled with gems--great folk settings for liturgy and rabbinic texts. Rick's guitar playing and rich voice, combined with excellent harmonies and arrangements, make this album a pleasure to listen to. This is definitely one to add to your collection. - Rabbi Larry Milder, November, 2000 Ø Come take your own journey to the land of serenity with Rick Calvert's latest release. Listeners of all ages will be drawn to these accessible melodies, rich harmonies, infectious rhythms, and tasteful production. Relaxation guaranteed! - Sounds Write Productions, January, 2001.

Here's what you say about
Rick Calvert - Journeys.