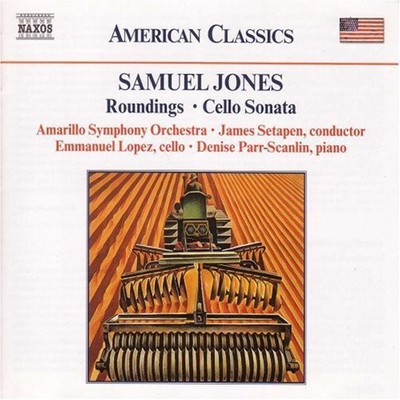 My symphonic suite Roundings was commissioned by the Amarillo Symphony to celebrate it's 75th anniversary. The suite was premiered movement-by-movement throughout the anniversary season, and it received it's first complete performance on 8th April, 2000, by the Amarillo Symphony under the baton of it's music director, James Setapen. The Prologue, "Hymn to the Earth" sets the stage for all that follows. A disarmingly simple piece, it consists entirely of slow chords which move in whole steps. These chords set up relationships which are explored in each of the following movements. Windmill depicts the motions of the wind, the wheel and pump which harness the wind, as well as a calling out for water. Oil Well has a main theme the shape of which constantly reaches for successively deeper pitches, mirroring the actions of an oil rig Sounds such as iron pipe and chains add to the description of drilling. The middle section suggests the upward flow of oil once the oil-bearing layer has been reached Locomotive commemorates the importance of the coming of the railroad to the establishment of a community in inland portions of the United States. The music describes the sound one hears at the depot as a passenger train approaches, comes to a halt, empties it's passengers and cargo, then departs, slipping into the distance. Lariat paints a picture of an old cow herder bragging of his skills with the rope to his younger colleagues, as fragments of cowboy songs, and eventually two complete songs, are sung around the campfire. Plow quotes an old Presbyterian hymn tune, entitled Dresden ("We plow the fields"). It also utilizes the celebrated Dresden Amen. The movement presents three statements of the hymn tune, each varied from the other. The second statement portrays the repetitive physical labor of plowing, and the final statement uses expanding and contracting instrumental voices, as well as the recorded sound of an old tractor, to illustrate the coming of mechanized farming. My Cello Sonata was written in 1996 and premiered on 14th March, 1997 by the Fischer Duo, for whose 25th wedding anniversary it was commissioned. It has subsequently been championed by the Lopez/Parr-Scanlin Duo, who performed it on a tour of the eastern U.S. before the present recording.