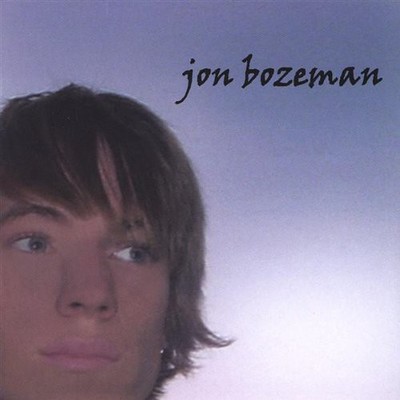 In an industry riddled with manufactured heartbreak and angst, Jon Bozeman's music stands alone. He's not some 'indie' guy who just wants to be different like everyone else, and his music is not calculated or formulated to slip and fit into a particular genre. Charasmatic guitar playing, emotive vocals, and strikingly honest lyrics come together to form a musical and lyrical conversation with the audience that is rare in today's musical marketplace. Even before the album was being recorded, Jon was playing shows all around the southeast, getting the attention of audiences, impressing music row vets, and grabbing the attention of producers and publishers alike. If the last few years of Jon's artistry is a reflection of things to come; he's got a grand future ahead. Jon's February release of his self-titled, debut album has spent several years in the making. 'When i came in contact with this piece of wood with strings and married that with the writings i loved, i knew my place as an artist,' Jon said about his humble beginnings. Since that artistic marriage at age 12, Jon has been forming his craft. What the listener will hear on the album can best be described as aggresive, guitar-driven music, woven between a lyrical style dripping with life experience and cutting honesty. In songs like 'Disclaimers,' Jon directs his attention towards the part in all of us that cries 'I'm hard to love, but need it!' It's amazing to hear how he takes this commonality between us all and crafts it into a fun-loving jam. In the emotive piece 'Stand In,' the listener can almost feel the frustration rising from jons pen and pick as he wales about being used for relationship fodder. And if you go a few tracks to the left, and turn the volume north just a bit, you would find yourself grooving to the song titled 'To No Conclusions.' Here he addresses life at it's best, capturing those moments where singing and dancing beg to go on, those moments that shouldn't, and knowing Jon, probably will not stop! 'I am very pleased with the record, but my most favorite outcome is all the different sounds that came out of production. If my songs were the soil, then all types of wild things grew out of them,' -JB. There's a song for every type of listener! From fun rock out, to chill acoustic coffee shop; he can fit into many moods and CD collections. He's bringing a sense of reality back in to music, but his honest style isn't boxing out audiences. He keeps it real, and leaves the listnening open to many types of ears. Bozeman's new album will not only increase the already present interest, but most important to Jon, it will spread his art to new audiences and places. Jon is bringing a fresh new feel and face to music, and we've been waiting!

Here's what you say about
Jon Bozeman - Jon Bozeman.