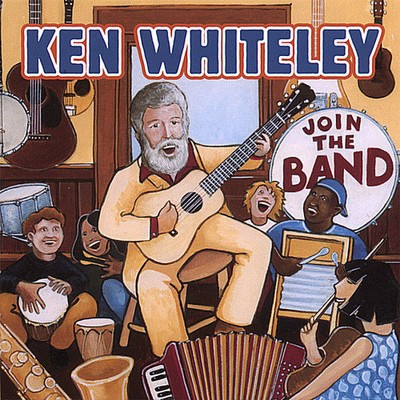 'Join The Band' Winner- Best Children's Album at the 2006 CANADIAN FOLK MUSIC AWARDS ! Nominated for a Juno Award - 2006 Children's Album of The Year! With a different instrument featured on each song, 'Join the Band' is a musical tour de force by award winning musician, Ken Whiteley. With 19 songs, most of them original, this master roots musician is at his eclectic best. The musical journey starts with the soca strains of the title overture. From there we explore a cappella singing, gypsy jazz, jump blues, celtic harp, old time banjo, zydeco, several different world musics, rock trombone and a mandolin extravaganza that mixes the music of Vivaldi, Cape Breton and south side Chicago. The song "Leaves", with exquisite flute playing by Kathryn Moses, has already won a "Song From the Heart" award from the Ont. Council of Folk Festivals for Best Children's Song . Joining Whiteley is an impressive list of 31 musicians and singers. They include George Koller and Dennis Pendrith on basses, Bucky Berger on drums, a horn section led by Sarah McElcheran, Lord of the Rings fiddler Anne Lindsay, singers David Wall, the Levy Sisters and Pat Patrick, plus children from the Alan Howard Waldorf School and the Oakwood Collegiate Chamber Orchestra. Ken himself plays twenty different instruments on the recording! Few performers share Whiteley's credibility in both the children and adult musical fields. He has produced more than 100 albums, with sales of well over eight million copies and including two Grammy nominees. Recent accolades include a Genie Award for Best Original Song in a Canadian movie, Estelle Klein Lifetime Achievement Award from the Ontario folk music community and a Children's Music Web Award. Artists he's worked with have earned 20 Juno nominations and Juno winners with Whiteley-produced CD's include Fred Penner and Al Simmons.

Here's what you say about
Ken Whiteley - Join the Band.