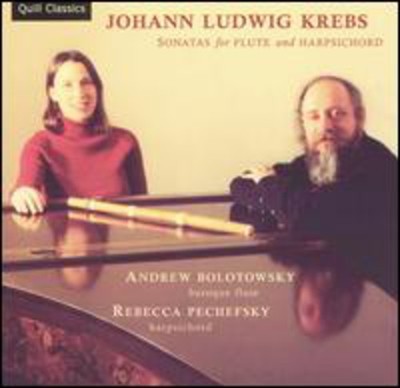 Flutist Andrew Bolotowsky studied with Elaine Schaffer, William Kincaid, and Jean-Pierre Rampal. He has performed over 3,000 solo recitals and participated in countless chamber music and orchestral concerts. He has performed with the Pan American, Westchester Philharmonic, and Brooklyn Philharmonic orchestras and has worked with Downtown Music Productions, Music Downtown, the American Festival of Microtonal Music, the Soho Baroque Opera, Muse (Colonial American Music), the Delbarton Baroque Ensemble, and New Amsterdam Baroque. Mr. Bolotowsky has been heard on radio stations WQXR, WBAI, WNCN, and WNYC; has appeared on television stations NBC, CBS, and NYC; and has recorded for Orion Recordings, Golden Age Records, Opus I, and Station Hill Records. He can be heard on the internet in Jim Theobald's work "Above Ground" for Flute and Electronic Tape. Born in New York City, Rebecca Pechefsky has degrees from Columbia University, Queens College, and the CUNY Graduate Center. A founding member of Brooklyn Baroque, she has performed at Carnegie Hall's Weill Recital Hall; in series such as Music at Morris-Jumel, Bach at Zion, and the Miami Bach Society; at the Boston Early Music Festival and the Harpsichord Center of Southern California. Ms. Pechefsky has premiered works by Frank J. Oteri, Louis Pelosi, Mary Inwood, Johnny Reinhard, and Ben Yarmolinsky. For Quill Classics she has recorded the complete harpsichord works of François d'Agincour, as well as "Bach and his Circle," featuring the music of Bach and his contemporaries. Currently organist at Redeemer Lutheran Church in Glendale, Queens, she lives in Brooklyn with her husband, Erik Ryding, with whom she has coauthored Bruno Walter: A World Elsewhere, winner of the ASCAP-Deems Taylor Award.

Here's what you say about
J.L. Krebs - Sonatas for Flute & Harpsichord.