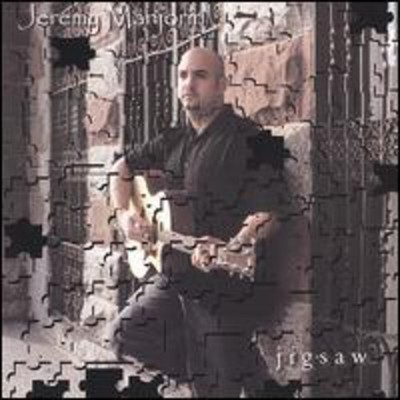 Jeremy began singing early on, doing chorus work and glee clubs throughout his primary school years. In eighth grade he received a gift from his father that is still affecting him today...a Cort Effector electric guitar. Playing through his stereo, and blowing the speakers in the first week, Jeremy's relationship with the six string began with such tunes as Limelight, by Rush, When the Levy Breaks by Led Zeppelin, and other such classic rock anthems. Later that year he began singing and playing in a Pseudo Brit Punk trio with band mates from school. High School gave Jeremy an acoustic guitar to add to his two electric guitars and an appreciation for folk rock and the blending voice and string alone. While singing in a Jersey Shore hard rock cover band his junior and senior year, he began honing his acoustic skills on such performers as: Cat Stevens, Simon & Garfunkle, Neil Young, and thanks to his mother's influence, John Denver. - Progression - College found Jeremy continuing to sing in various cover bands, playing shows for the St. Peter's College student community. But it's also where Jeremy discovered a love for English Literature. And while taking a break from his music, he began learning the power of the spoken word. After college, Jeremy went on to receive his Master's in English Literature from Rutgers University, publishing short stories in small market press magazines and getting a few poems anthologized. It was only a short time until Jeremy would marry a love of music with the written word. - From here to... - Another cover band after Rutgers, playing shows on the Jersey shore while teaching English Comp at Rutgers and working a day job left Jeremy wanting more. So the writing began, taking pieces of his poetry and combining it with music derived from a multitude of influences. Two year later his first CD was ready for recording. The CD, rightfully titled 'jigsaw,' mixes a variety of guitar styles and musical influences with a variety of topics. Ready to tackle bass, piano, and synthesizers, as well as all the vocals and guitars, Jeremy wrote, recorded, and played all the parts on the CD (except the percussions, supplied by a studio drummer). He's currently working on his second CD to be released later this year. ----------------- INDUSTRY PROFESSIONALS SAY: 'Jeremy Manjorin... not your typical music. Bold, edgy & melodic...a progressive set of songs, the kind of songs you miss. This CD gives the listener a rare look into the mind of a real musician.' - Peter Rizzo - MTV Studios 'A high quality of musicianship, coupled with a group of well-written interesting songs and the dedication to producing a fine sounding, polished set of tracks, the 'jigsaw' CD leads more to a unique music experience rather than a selection of well produced songs...' - Kostadin Kamcev - Sound/Mixing Engineer - Studio Mozart/Granite Alps Recording One day we'll get over this 'stuff' they call music that they play on commercial radio and we'll get back to the roots.. great lyrics.. catchy songs and musicians that have the ability to play their instruments.. this CD is a truly a gem with all of the above qualities and definitely will sit on top of my currently played pile for weeks to come. - Myke Koric 'Psychedelic Duncan Sheik. A pleasure to the ears.' Karen Rush - FOX News 'jigsaw brings to mind the long lost era of rock music when Rush and Led Zeppelin ruled the airwaves... as dynamic on stage as in the studio, a Jeremy Manjorin performance leaves you begging for more.' Paul Rosetti - editor, Italian Tribune newspaper.

Here's what you say about
Jeremy Manjorin - Jigsaw.