Shama - Jewel in the Lotus 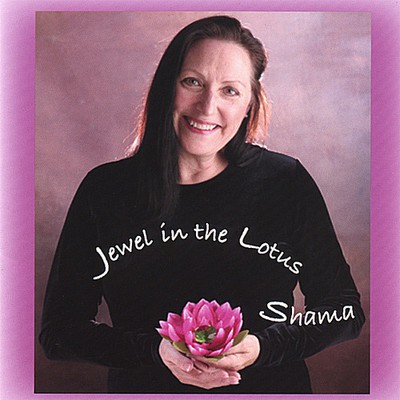 Shama's music: Shama's music is a melting pot reflecting the many mystical, spiritual and musical influences in her life (Hinduism, Buddhism, Sufism, Mystical Christianity, Shamanism and the Kabbalah). Shama views all these teachings and practices as different facets of the diamond mind. Through any one of them, we can see that all these differences are illusion, and that in truth all is one. Sound is a path which can guide us there. Her chants include different languages such as Sanskrit, Tibetan, Hebrew, Arabic and even Zulu. While she utilizes mantra and sacred languages for the powerful energies they evoke, she often weaves in poetic English translations that allow the listener to experience the ecstatic emotion expressed by the meaning of the chants. Her voice carries a sacred, healing vibration, which in one moment can be animated and energizing and in the next deeply serene and contemplative. She accompanies herself on the harmonium, keyboard and tambura with help from a variety of musicans playing guitar, bass, tabla, cello, violin, harp, sarangi and esraj. These instruments reflect the world influence present in her music. About Shama: Shama began to focus on music seriously in her life after a major life transition at age 30. She studied African dance and drumming with West African teacher Ibrahima Camara in Boston for three years. She then studied Afro- Cuban drumming, continuing in Hawaii, where she joined a singing troupe led by Lila, which performed original spiritual songs in many languages with African drum accompaniment. In Portland, Oregon, Shama began vocal study of Indian raga music with disciples of Pandit Pran Nath, including Terry Riley, Mashkoor Ali Kahn, Hafizulah Khan, Michael Stirling, Rik Masterson and Rose Okada. She studied in India with some of the masters of the Kirana Ghirana lineage. Through the vocal practice of this discipline, her voice developed both in it's range and control as well as in it's ability to carry the energy of Spirit. During this time she experienced kirtan with Jai Uttal and Krishna Das and felt an immediate affinity with chant as a meditative practice. She also studied with several sound shamans, including Frank Coppieters and Joska Soos and Tito La Rosa, as well as sound healers such as Chris James. Shama bought a harmonium and found Spirit teaching her how to play and lead chant. In 2004 she began using a keyboard, enchanted with the exotic world sounds it was able to evoke in her music and chants. Again she felt Spirit guiding her playing and songwriting in ever-expanding ways. She shares her music in chant evening as well as in New Thought churches and in special events such as labyrinth walks and solstice/equinox ceremonies and peace events. In 2006 she joined the shamanic sound troup Shemaya, which creates improvizational healing sound. In 2007 she joined an Indian Fusion group, Hafizullah, led by Rose Okada.

Here's what you say about
Shama - Jewel in the Lotus.