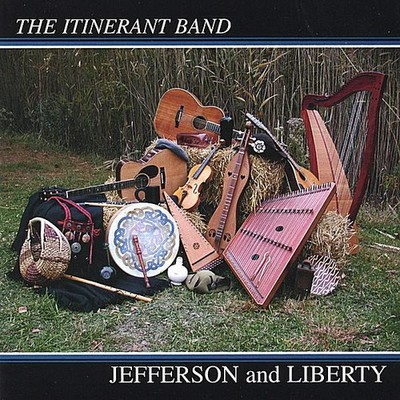 The Itinerant Band is made up of seven musicians from the Tidewater region of southeastern Virginia. They come from diverse musical backgrounds and have a shared passion for history that has led them to specialize in the music of early America. They perform tunes and songs from the Irish, Scottish, English and French traditions that would have been heard in 17th and 18th century North America. In the spirit of the itinerant colonial musicians whose style they emulate, you may find as few as two or as many as seven of them at any given time and place performing everything from airs to sea chanties to dance tunes. When all together, the group consists of George Bame on guitar and vocals, Paul Brockman on fiddle and vocals, Bob Clark on hammered dulcimer, Susan Lawlor on flute, whistle and recorder, Dave McNew on bodhran, bones, Appalachian dulcimer and vocals, Mary Normand on Celtic harp, and Marsha Wallace on guitar, mandolin and vocals. Jefferson and Liberty is a collection of 18th century tunes and songs chosen as representative of those played and sung by working class musicians in the North American colonies. It features jigs, hornpipes, and reels from the English and American country dance repertoire, as well as a French-Canadian dance and party song, 'La Bastringue'; airs from Ireland and Scotland, military fife tunes from England and France, a Charles Wesley hymn and a Caribbean sea chantey. The title cut, 'Jefferson and Liberty' is an Irish jig that was adopted as Thomas Jefferson's 1800 presidential campaign song. Also included is 'O! Say Bonnie Lass', a song taken from the recently discovered musical notebooks of Capt. George Bush, a soldier in Washington's continental army. The album is a sampling of colonial American and European music that would have been shared across political and social boundaries from the pubs and taverns to the dances and parlors. Review - Dirty Linen #103 (Dec 02-Jan 03) '... This group wisely avoids the obsession with historical authenticity that makes some similar groups unlistenably precious. The members add a few contemporary instruments like guitars and octave mandolins to the fiddles and flutes that would have been used back then, and they clearly enjoy what they're doing, playing with feeling rather than academic dryness. The resonating hammered-dulcimer leads on many of the instrumental tracks are especially lovely.'

Here's what you say about
Itinerant Band - Jefferson & Liberty.