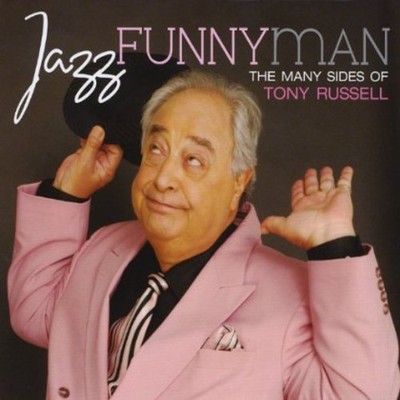 JAZZ FUNNYMAN...The Many Sides of Tony Russell! WOW! What an entertainer! Singer, musician, stand-up comedian, composer, actor (both big screen and television, ABC Network hit cmedy 'Life With Bonnie' starring Bonnie Hunt)...Tony does it all! He swings! He's lovable, affable, gregarious and hilarious. You'll enjoy his sensitive side too when he solos on piano and vocals on a few lovely ballads. 'The Letter' is hysterical. What a CD! Wow! Some notable quotes.... 'Tony really swings!', Bill Miller, Frank Sinatra's Musical Director 'Tony Russell is shameless, absolutely shameless, in his desire to entertain a crowd. He gives 100%! Wherever you see Tony, you'll smile at his outrageous talent, his sunny disposition, his concern and courtesy for people around him. He's truly one of those guys who deserves to be successful. When I saw his show, the best thing I can say is, it felt so good to laugh, really laugh hard with this charming funnyman.' Myrna Daniels, LA Jazz Scene Anthony Russell has parlayed an extensive talent for music into an acting career that includes stage, film and television productions. As a child, Russell played harmonica, ukulele, guitar, trombone and piano. He worked his way through college playing and singing in a show band. After graduating Montclair State College with a major in trombone and a minor in piano, his band was booked as a Las Vegas lounge act in many of the major hotels. Russell even worked in the Atlantic City 500 Club where Dean Martin and Jerry Lewis first got together as a team. Encouraged by his friends who recognized his talents, Russell journeyed to New York to study acting at HB Studios and eventually earned a coveted membership in the acclaimed Actors Studio. He appeared in four of the group's stage productions, and was also in the cast of 'Lamppost Reunion' which won the best ensemble acting award at the Court Theater in Hollywood. Russell's other Theatrical appearances include, 'A Streetcar Named Desire', 'Guys & Dolls', 'One Flew Over the Cuckoo's Nest' and 'Two Gentelmen of Verona'. Russell also pursued stand-up comedy, and made appearances in many of the famed U.S. comedy clubs such as The Comedy Store, The Improv in Hollywood, The Ice House, and The Comedy Magic in Hermosa Beach. He also made comedic appearances on 'The Merv Griffin Show', 'The Dinah Shore Show', 'Norm Crosby's Comedy Shop', 'Madam's Place', 'Make Me Laugh', and 'The John Davidson Show' to name a few. He's opened for Las Vegas stars such as Frankie Avalon, Julie London, Roger Miller, Joe Williams, Tony Martin and Lou Rawls. Anthony came into prominence as 'Tony Russo' on the hit comedy on the ABC Television Network's 'Life With Bonnie'. Anthony says, 'Bonnie Hunt changed my life. After many years of struggle, she wrote the part for me and fought with the network to hire me. I owe her a debt of gratitude that I'll probably never be able to repay.' Also on television, he was a recurring character on 'The Fanelli Boys' and guest starred on 'NYPD Blue', 'Becker', 'Home Improvement', 'Mad About You', 'Roseanne', 'The George Carlin Show', 'The Profiler', 'Reba', 'The John Larroquette Show', 'Diagnosis Murder', 'Silk Stalkings', 'Night Court', 'Sabrina, the Teenage Witch', 'Family Law' and 'Arliss.' Russell's film credits include 'The Black Dahlia' with Josh Hartnett, Scarlett Johansson and Hilary Swank,'Bugsy' with Warren Beatty, 'Casino' with Robert De Niro and Joe Pesci, 'Ed Wood' with Johnny Depp and Martin Landau, 'Out For Justice' with Steven Segal, 'Suddenly' with Kirstie Alley, 'Living out Loud' with Holly Hunter and Danny De Vito, and 'Winchell' with Stanley Tucci. Russell continues to play piano everyday, loving the classic composers of American music, particularly The Gershwins, Rodgers and Hammerstein, Rodgers and Hart, Cole Porter, Jerome Kern, and Frank Leosser. Russell also has a jazz band where he sings, plays, does stand-up and has wail of a time. Russell's other passions include watching old movies with his wife and best friend Rosemarie, walking with his beloved dog Angelo, learning old songs, and appreciating natural beauty. He's also very busy when not involved in projects on TV and film with personal appearances around the country in theaters, corporate events and jazz clubs.

Here's what you say about
Tony Russell - Jazz Funnyman-The Many Sides of Tony Russell.