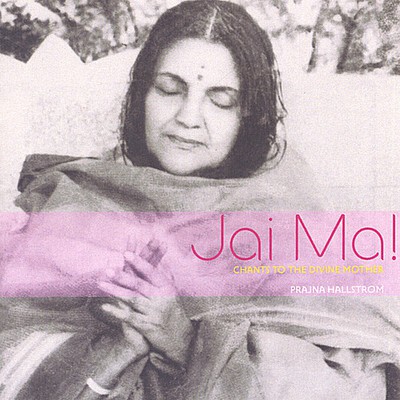 Biographical Blurb Lisa Prajna Hallstrom is a teacher, singer, and spiritual counselor with a PhD in Hinduism and Buddhism from Harvard University. She has taught at Smith, Mt. Holyoke and Bard Colleges and has facilitated personal growth workshops for many years as well as the Women's Spirituality Program at Interface in Cambridge, MA. Her own spiritual path integrates Hindu mysticism and bhakti yoga, Tibetan Buddhism, and earth-based spirituality. In the course of her journey, Prajna has studied with many spiritual teachers and has, through the gifts she has received as well as the disillusionments, come to discover the power of a direct relationship with the divine, in particular with the Divine Mother. Her book, Mother of Bliss: Anandamayi Ma (1896-1982), published by Oxford University Press (1999), is soon available in paperback. She has recently completed a live kirtan CD entitled "Jai Ma!" that is available through CD Baby. She facilities rites of passage for girls and women, officiates at memorial services and performs weddings in Massachusetts in her capacity as an Interfaith Minister. Prajna lives in Lincoln, MA, surrounded by her children and grandchildren, but leads chanting evenings and workshops around the country. Prajna's story: When I was twenty-five I began to practice hatha yoga and found out very quickly that my favorite part of the class was lying in shavasana at the end of class and feeling the bliss of a quiet mind. A couple of years later I read Be Here Now by Ram Dass and had my first real awakening. In reading about Ram Dass' experiences with Neem Karoli Baba, I felt a deep longing for two things: a direct experience of God and a guru who could give me that experience. A friend told me, "When the disciple has the longing, the guru will come." In 1975, on my thirtieth birthday, I received shaktipat initiation from Baba Muktananda and my life has never been the same. For seven years I followed Baba from place to place and discovered the bliss of bhakti yoga, the power or spiritual community, as well as the potent medicine of chanting the Divine Name. In 1982, when Muktananda passed away, I decided to pursue the yoga of knowledge, jnana yoga, and began first a Masters' program and then a PhD program in the religions of India. It was so nourishing to learn about the roots of my experience as I studied Sanskrit and the Hindu and Buddhist scriptures. It was an amazing blessing to be able to spend seven years researching and writing a book on one of the greatest spiritual beings of our time, Anandamayi Ma. I came to enjoy a direct relationship with the Divine Feminine as I simultaneously immersed myself in Ma and facilitated a year-long women's spirituality program at Interface in Cambridge, MA. After I completed my PhD, I taught in academia for several years but found that I was first and foremost a practitioner and that I preferred to teach in venues in which I was free to share my personal practice and experiences. Since the death of my guru, I had established a powerful connection with Tibetan Buddhism, especially through attending teachings with His Holiness the Dalai Lama. Therefore, for the past six years I have taught workshops on many aspects of the Hindu and Buddhist traditions: for example, She Who Hears the Cries of the World: Green Tara and Quan Yin; Kali, the Fierce Goddess; and Hinduism 101 for Yogis and Yoginis. In the meantime, the only thing missing in my spiritual life was the heart-opening chanting of my days in Baba's ashrams. How could I find a community to chant with that was inclusive of all of my practices and spiritual connections? When I went to the first Ecstatic Chant weekend at Omega in 2004, I knew I had found my answer. As I blissed out to the music of Krishna Das, Deva Premal and Miten, and Wah!, I realized that my calling was to share my passion for chanting. I invested in a harmonium as soon as I got home and began inviting friends over for kirtan. Three years later we have a thriving chanting community in the Boston area. Our live kirtan CD, Jai Ma!, has just come out and we are taking our kirtan on the road. The CD is dedicated to the Divine Mother and her manifestations as Anandamayi Ma and Ammachi, my two spiritual mothers. Tasyai Shri Devyai Namaha. To you, Divine Mother, I bow!

Here's what you say about
Prajna Hallstrom - Jai Ma.