Rich Landar - It's About Time 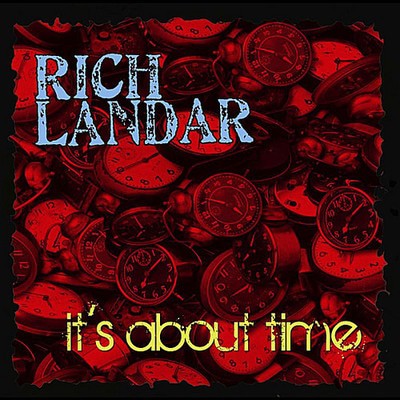 What do these top Portland area bands and musicians all have in common? King Black Acid, Jesus Presley, Richmond Fontaine, Scotland Barr and the Slow Drags, Amelia, Mission 5, Floater, Mike Coykendahl, Rowdy James,Stephanie Schneiderman, Analisa Tornfeldt, HyDrive, Telephone and the Brothers of the Baladi Rich Landar has been a band member or has recorded with all of the above, adding his talent and musical approach to those artist's vision and helping them create some of the finest music to come out of the Northwest. While Rich has been playing shows with his 'Sonic Jelly' band he hadn't released a recording sharing his genre bending musical vision until now. His new album, 'It's About Time' offers ten songs which reflect many of the influences that has formed his musical background. Ranging from the blues rocking 'My City is Burning' which features soul songbird Tahoe Jackson, the folky rock of 'My Week', to the psychedlic piano ballad 'White Curtain' Rich has released an album that has a variety of moods but is held together by great musicianship and a dynamic approach to songwriting and arrangements. Rich plays most of the instruments and handles all the vocals, and he is joined by an all star group of Portland's finest musicians including (the aforementioned) Tahoe Jackson (Black Angel), Paul Brainard (Richmond Fontaine, The Sadies), Jon Itkin, Cameron DePalma (HyDrive), Gabriel Trees (HyDrive, Jesus Presley, Jellyroll) and Salem OR's tightest rhythm section in John Pounds (Elton John and a million others) and Mark Powers (The Afrodesiacs, The Spasmatics). Please check out 'It's About Time' and watch for live performances by Rich Landar, both solo and with the Sonic Jelly band.

Here's what you say about
Rich Landar - It's About Time.