Chuck Tumminia - It's About Time 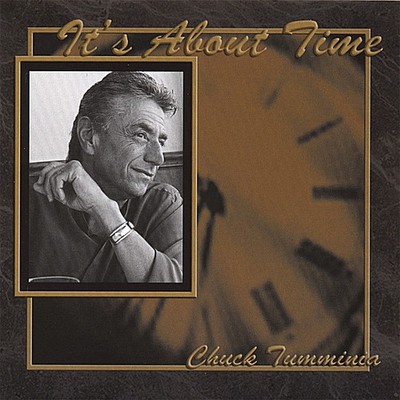 This is a project I have been dreaming about for many, many years. It all started at my confirmation godfather's bar, the Blue Room, in San Francisco, in 1948. I was four years old, and made my debut singing Ain't She Sweet and dancing a soft shoe. I can still remember the looks on the people's faces at the bar as I sang in front of the fireplace. That was all it took! My mother was a singer and musician, and I learned harmonies sitting at the piano with her and my dad. She was a great influence in my life. My aunt, Josephine Tumminia, was a star at the Metropolitan Opera in the 1940s. She was the first opera star to sing jazz. My father was a singer also, so there was always music in my house, in my life and in my soul. I grew up in the music era of the old standards. My father owned a bar and restaurant and he would always bring home the 78rpm records from his jukebox at work. I would play them on his black plastic Decca Record player, and sing along with Sinatra, Dean Martin, Al Martino, Nat King Cole, Bobby Darin, Rosemary Clooney, and the whole genre of the 40s and 50s. About 10 years ago I met a piano player and singer at a restaurant in Greenbrae, California. He was playing a gig there and I enjoyed listening to his piano style and singing. The kind of songs he played appealed to me, and the way he played them was reminiscent of the way my mother played. His name is Jef Labes. I found out later he had played with Van Morrison and other fantastic musicians. This man has the touch!! I sat in with him a few times and knew there was something there. So in May of this year I contacted Jef and said I had a project I wanted to do with him. I gave him a list of 22 songs and we pared it down to 17. A great song, Concrete and Clay, was his addition to the list. I told Jef I wanted to do a CD of standards, but differently than other artists. I had some rhythms and style changes in my head and he had many better ones. It was a great collaboration. All of these songs represent parts of my life. It's all about love and special people. I sang You Are My Special Angel at my daughter Marisa's wedding. More was the first dance song at our wedding when my wife Jan and I were married. My uncle, Jack Sharpe, wrote the lyrics to the smash hit So Rare. I think he would have approved of this arrangement. The rest is for all my family and the friends I have met as my life bumps along. Cinema Paradiso is a tribute to my Sicilian heritage. I would like to thank Jef Labes for all his support, talent and drive. I couldn't have made this CD without him. Thanks to Jim Reitzel, chief engineer at Tarpan Studios and Tarpan Studios in San Rafael for their generosity and support. Thanks also to the great musicians that helped make this happen: George Brooks on sax, Brad McKeague on drums, Graham Bruce on flugelhorn and Brian Burns on harmonica.

Here's what you say about
Chuck Tumminia - It's About Time.