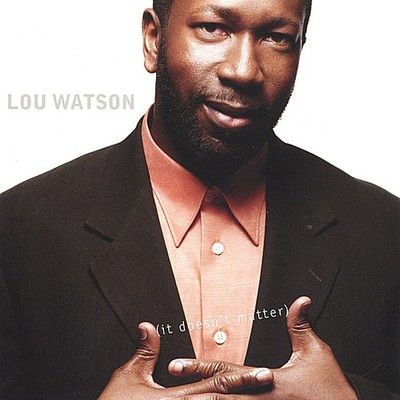 About Lou Watson... 'Lou's got class and an intoxicating vocal style.' That's what audiences are saying about Jazz vocalist and pianist/composer Lou Watson. He blends his deep, warm, sonorous baritone together with songs of his own creation, in the classic Jazz/R&B tradition, to produce sensuous, romantic, and truly timeless musical creations. Lou has that special kind of magic that comes with musical maturity. It's an inherent ease, an innate knowing. Unquestionably in his prime, Lou Watson's consummate artistry is on full display on It Doesn't Matter, his debut album, scheduled for release on the Village Notzâ?¢ Music label. The album will be available in e-Stores on December 11, 2003, and in stores January 12, 2004. Effortlessly blending jazz and R&B with his ever-soulful approach, Lou brings new life to a selection of songs he carefully picked with acclaimed jazz pianist/composer/ arranger Onaje Allan Gumbs - the album producer. With Lou's superb lyrical interpretations, Onaje Allan Gumbs' masterful production and arrangements, and a cadre of top-flight musicians, the album shines a light on songs that speak to various aspects of love. In addition to the yeoman performances of Kenny Davis (bass), Camille Gainer (drums), and Dennis Davis (drums) among others, the album feature superb solos by Romero Lubambo (guitar), Gregoire Maret (harmonica), Abdul Zuhri (guitar) and Roger Byam (tenor saxophone). Lou has a flair for infusing the familiar and the 'gold standards' of music's enduring songs with a fresh, original and utterly unique style entirely his own. Lou reinforces the notion that 'You Can't Hurry Love' with his contemplative reconstruction of the Holland, Dozier, Holland composition. Softly strong, and reminiscent of the wonderful arrangements of the heyday of 70's cool, Gumbs' deliberately artful piano intro launches Lou into his reverie of the classic 'Like A Lover' (D. Caymmi/A. Bergman/M. Bergman/N. Motta). Then, Lou pensively emerges from behind the flowing lace curtain of Romero Lubambo's solo guitar with his reflections of 'So Many Stars' (Sergio Mendes/A. Bergman/M. Bergman), polished even brighter by the colorful styling of Gregoire Maret's harmonica. Lou brings sensitivity and soul to every cut. For several years, Lou has been performing in nightclubs in the New York metropolitan area, as well as private affairs both as a solo pianist and with his jazz trio serving up stylish renditions of traditional jazz standards. He has also performed with countless concert tours and road productions. Different stylistic genres, and artists such as Johnny Hartman, Nat King Cole, Louis Armstrong, Patti Austin, Kurt Elling and Dianne Reeves influence Lou's vocal style. His R&B musical heritage, united with jazz, funk, pop and gospel, combine to form his highly personal, distinctive vocal style. All of these influences helped inform Lou's own musical choices. It Doesn't Matter says much about his approach as he begins the next phase of his musical journey. It Doesn't Matter finds Lou Watson continuing his exploration of new avenues for expression. A singer of ballads and standards so adept at establishing and sustaining a pervasive mood, he often makes everything outside the musical moment seem trivial. Easing into a situation, and working toward an emotional tone so deep that once established it seems medicinal, Lou's voice warms the body and soothes the soul like an intoxicating tonic.

Here's what you say about
Lou Watson - It Doesn't Matter.