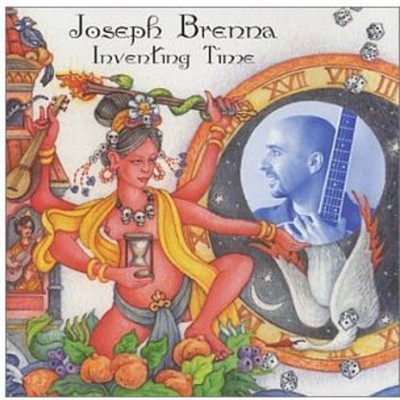 Joseph Brenna, a virtuoso composer/guitarist and master of musical styles from jazz to blues and contemporary Americana, has returned to live performance in support of the release of his first solo acoustic CD, Inventing Time, on the What Are Records? label. A performer based on the East Coast for most of his career, Brenna has founded and led several critically acclaimed bands. Inventing Time and his current live performances mark a new direction as a solo acoustic guitarist playing original instrumentals. His technique is consummate, his song-writing quietly thrilling, flavored by a world of eclectic influences from Middle Eastern to country blues and classical. While Brenna's shows are warm and intimate, his new songs, co-written with producer Rob Gordon, are filled with moments of musical daring. Brenna's performances are like tours of musical galaxies, where he lights in one place just long enough to entice his audience into a return visit. Brenna has won critical praise for both his songwriting and his mastery of the guitar. College Music Journal has described his music as 'An interesting sound, a blend of American songcraft and worldly rhythms ' and The Austin Chronicle wrote, 'A sure-footed compositional sense (and) very canny arrangements.' In a concert review, the News-Gazette (Lexington, Virginia) said, 'His power on the guitar is almost overwhelming ...combining lightning quick runs and fills with powerful rhythms, delicate melodies, and sensitive playing.' After teaching himself guitar, Brenna began his formal musical training at Brown University where he studied electronic music and third stream music (a movement that combines jazz vitality with classical formalism). He also played in a Ghanaian drum ensemble led by master dancer and drummer Freeman Donkor and later supplemented his private guitar studies with coursework at Berklee College of Music. An eclectic career, including forays into jazz, blues, world beat, avant-rock, and free improvisation, provided the foundation for the adventurous and diverse music on Inventing Time. Beginning in 1986, Brenna founded and led the bands Between the Lines, The Electric Jazz Trio and Flash to Bangtime into clubs and concert halls across the country. He also performed improvisations with a variety of artists including members of the New Bohemians. He released two CDs with Between the Lines (the first on What Are Records? and produced by Gordon) before retiring from live performance in 1996, due to a bout with cancer. During his years of recovery in Philadelphia, Brenna turned to teaching guitar and began to develop his unique approach to solo guitar through writing and arranging, while taking time out from his career to study and practice meditation and Buddhist dharma. While visiting Colorado in the summer of 1998, he spent five weeks writing new material with Gordon (founder of What Are Records). To continue the collaboration, and inspired by the beauty of the Rocky Mountains, Brenna moved to Boulder in the summer of 2000. He began teaching guitar at Naropa University and privately, and playing with local musicians, while he and Gordon finished writing and recording the sixteen original songs which comprise Inventing Time.

Here's what you say about
Joseph Brenna - Inventing Time.