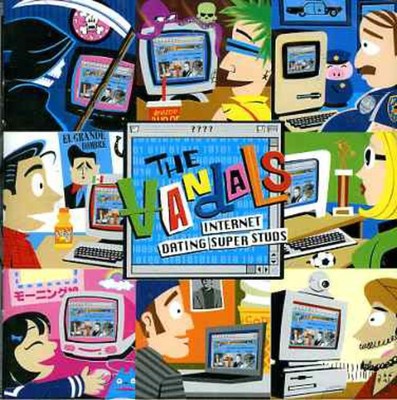 Enjoying the best success of their career in the 21st century, The Vandals are an unheard of example of a band slowly getting better and selling more and more records long after most of their peers have either broken up or just sucked so hard no one wants to even look them in the eye. Early in their career, The Vandals played small clubs, appeared in a few Penelope Spheeris films, sold a few records and had a few radio hits. This was beyond the wildest dreams of the young band from Huntington Beach, California. After all, it was just a hobby for them. Solidified in 1989 with the addition of Josh Freese (The Vandals' own discovery), the band really didn't kick into high gear until 1995 when Offspring vocalist Dexter Holland signed them to his own label, Nitro Records, and the band hit the road full time booked by super agent Stormy Shepherd. 'That was a life changing transition. With our booking agent and record deal in place, we could concentrate on making better music,' admits Joe Escalante, bassist of The Vandals. After playing the main stage on the entire length of the 2001 Warped Tour and it's European cousin, the Extreme Fest 2001, The Vandals just refuse to stop bringing their music directly to their loyal following. After signing to Nitro, The Vandals picked up steam when the release of Live Fast, Diarrhea struck a chord with the new school Lagwagon, NOFX, Green Day crowd. Their fans got younger and more appreciative as the ticket and record sales went higher and higher. The next three records on Nitro (The Quickening, Hitler Bad: Vandals Good, and Look What I Almost Stepped In) each built upon previous sales figures until The Vandals reached their goal of being able to sell 100,000 units of each release. On the live front The Vandals are headlining rooms like the Hollywood Palladium and the London Astoria and playing many of the major European festivals. Making better music has been the Vandals mantra for years and their new album 'Internet Dating Super Studs,' which hits the stores on Sept. 17, is exactly that, better music. The songs are amazing. The band has still got it, and this one is for the fans. Internet Dating Super Studs, makes no apologies for Punk Rock. 'It was not written to satisfy some fantasy that a radio or MTV hit was perhaps in our future,' claims chief songwriter and producer Warren Fitzgerald. 'We're not trying to break into a new market. We love the market we're in, and it's been great to us.' The Vandals' first proper album for Kung Fu Records will find the band doing a lot of advance promo in the guise of an Internet 'buy the record, date the band, then date each other' scheme that should be a lot of fun, leading up to what could be their best album yet. 'We came up with this Internet dating scheme as a way to have fun, while trying to stir up some interest in our album,' says Escalante, 'now that we're finished with the album, I'm thinking it doesn't need some wack scheme to get the word out. But we're doing it anyway, because we have no dignity!!!'

Here's what you say about
The Vandals - Internet Dating Superstuds.