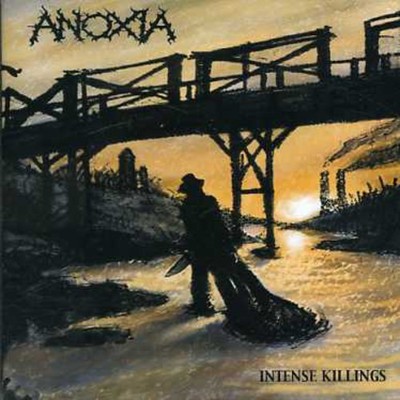 Right from the beginning, "Intense Killings"(Anoxia\'s first full length album) is a brutal and chaotic slab of grinding Death Metal. From start to finish, every song is insanely fast and heavy, offering almost nonstop blast beats, hundred mile an hour riffs, and guttural vocals. The only breathing room is found in the occasional, cleverly used sound sample. The music itself is almost as technical as it is unrelenting. These guys seem to have an endless supply of riffs, as no riffs are repeated later in songs; they just go from part to part. Tempo changes are abundant, as songs constantly switch from being fast, to mid-paced, back to fast, and then they get even faster. Vocally, singer Dan Pevide (also of GOREALITY) offers a wide array of growls, grunts, and screams. His lyrics are also incredibly disgusting (as is the case with many DM bands), most notably "Sex Crime Atrocity", which details the rape and murder of a fourteen year old girl, and "Fecal Murder", a song about a murderer who kills people by choking them to death with his own shit. The production is good as well, as every instrument is clearly audible. This is a very good album overall, and should please any fan of brutal DM.

Here's what you say about
Anoxia - Intense Killings.