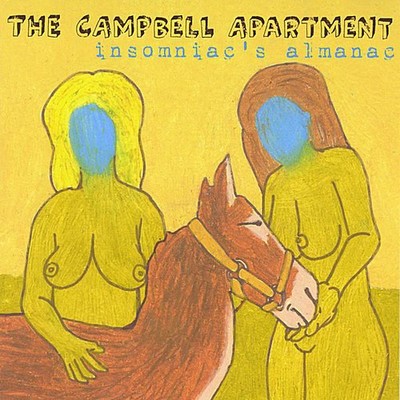 Awful driver, singer/songwriter, Soviet-born oil painter, lap swimmer, deep thinker, rapid-texter, animal lover, (yet steak enjoyer), and all-around Renaissance man, Ari Vais sought out the rhythm-section-for-hire duo of Dan Haag and Dave Harman just over a year and a half ago, gave them a crash course in singing background vocals, and formed The Campbell Apartment. Prior to this, Ari performed with such bands as The Pelicans (see Queer Eye for the Straight Guy Season 2, Episode 13), Humbert, Bags, and used to have a solo acoustic residency at London's legendary 12 Bar Club in Tin Pan Alley. Dave and Dan played in a bunch of bands also, but as stated before, they are just the rhythm section so it really doesn't matter who those bands were, but mind you, they all were great bands-ones you would have loved. You may have even wanted to buy their band's t-shirts and Cds... Anyway, the three of them have been rocking the faces off of crowds from Guelph to Athens and Asbury Park to Chi town, sharing stages with the likes of Fountains of Wayne's Chris Collingwood, Maps, Jonah Matranga, and hundreds of other bands that are not famous enough to name-drop yet (but are still great in their own right)--leaving behind an ever-growing group of loyal fans. Last month, these fans were presented with the groups first full-length LP, titled Insomniac's Almanac. Produced by Ian Love, the record (which was recorded and mixed in record time in the shipyards of Brooklyn from January 26, 2008 to February 2, 2008) provides the listener with 13 power(y)-pop gems-and one lullaby-most under 3 minutes or less. The obvious influence of FOW and Guided by Voices are worn like proud badges on the guys sleeves (Ari once wanted to start a GBV cover band called Voided by Vices), and the mere mention of the APT in the same sentence as these 2 great bands make the guys smile and blush. However, there is a lot of originality in the songs as well. 'The songs are typically short and to the point - like a good butcher, The Campbell Apartment cuts the fat and just gives you the meat of the song. A great gift for your loved one with A.D.D.'--Bill's music forum. 'There are to-the-point tunes like the minute-long title track, a simple yet beautiful acoustic reverie with a string section, and the wistful reminiscence that's spiked by a chorus both hilarious and true for anyone whose preteen years are still fresh in their mind ('And everyone knows/ Sunday blows/Sunday blues').'--Daily Hampshire Gazette 'The short tunes are full of cognizant material and occasionally hilarious lyrics.'--Powerpopaholic 'They pop harder than humanly possible--the Orville Redenbachers of the NYC music scene if you will.'--Headphone Treats 'Reminds me of Ween'--Damon Gough (Badly Drawn Boy) 'Very Pavementy'--Joe Levy, Rolling Stone 'What a nice looking bunch of boys'--Ari's mom The band is presently continuing to book shows all over the country and plan on doing a Southern states tour in the Fall. The are also slated to do a video for their song St. Louis with famed director/film maker Adam 'Tex' Davis and Brian DeQubellis (DeQubellis Films). Other than that, Ari spends more and more time on the west coast, Dan is obsessed with Indian food, and Dave has a cool recording studio, so buy their record and they hope to see you at one of their shows soon.

Here's what you say about
The Campbell Apartment - Insomniac's Almanac.