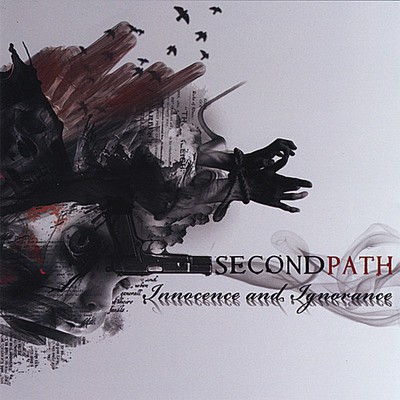 Reigning from their stomping ground of Elmwood Park, Illinois and presently residing in Chicago, Second Path blends the harmonies from all of their members, with head slammin', dual guitar riffs in creating their signature, hard rock sound. Comprised of Anthony Lionello (Lead Guitar/Vocals), Jeff Demaio (Drums/Background), Mike Petitti (Bass/Background Vocals), and Dan McCloskey (Rhythm Guitar/Vocals), Second Path embarked upon their collective, musical journey four years ago. As they frame their music with lyrics that illustrate the morality and irony of daily existence, the band recorded and released their debut, full-fledged, studio LP in May of 2008. 'Innocence and Ignorance' was produced by the band at Real Deal Recordings, under the artistic direction of Craig Baker. As Craig also aided Second Path in recording a three song EP in 2005, he's also responsible for the band's 2006, smash-hit single, 'Let Myself Forget'. Influenced by such industry artists who include Metallica, 311, System Of A Down, Sevendust and Avenged Sevenfold, Second Path continues to create songs that are reflective of the trials, tribulations and triumphs that saturate life and experience. To promote their music to the masses, Second Path has taken center stage at a plethora of industry events. Performing before live audiences at just about every rock venue across Chicago, the boys have also embarked upon a series of small tours throughout the Midwest. As hosts of their CD release party at The Kinetic Playground, Second Path has also been showcased at BoDog, XMG and Mobfest. Garnering airplay on Q101, the band has won several radio and battle of the band competitions. Having opened for industry headliners who include Hinder, Local H, Vanilla Ice and Don Dokken, Second Path is privileged to have been featured in the December issue of Intense Ink Magazine. Accordingly, they are in the production phase of recording music videos for two of their career defining singles, 'Did You Notice' and 'Hell's Town'. Ultimately, Second Path aspires to travel the world; solidifying themselves as respected, successful artists of the music industry.

Here's what you say about
Second Path - Innocence & Ignorance.