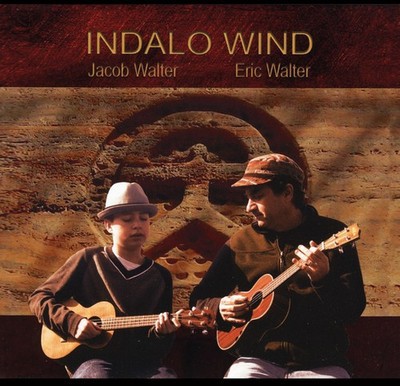 "Father and son, Eric and Jacob Walter, compose and perform as the eclectic duo Indalo Wind. I've known Eric's music for many years, sometimes as a collaborator, and it always bears the mark of a natural organic flow born from his innate musical sensibilities. Judging from this recording, the apple doesn't fall far from the tree. Jacob's playing has the same easy feel as his father's and they complement each other's musical spirit well, the intimate sound of nylon strings blending together often with an Appalachian bluesy feel. In Schiarazula Marazula, their ukuleles' contrapuntal lines capture the sound of a Renaissance lute and, at other times, when joined by the clear-toned Native American flute, their music could work in the score of a Sergio Leone western. With Latin-laced adventures (Garden of Stone), plaintive beckoning flute (Zuñi Sunrise) and even a nod towards the catchy bluegrass sounds of Old & in the Way (Ce n'est pas une chanson), this music covers a lot of ground but keeps circling back to it's soulful, bluesy roots, anchored in the artful playing of father and son." -Courtney Von Drehle (3 Leg Torso) "El indalo is a symbol well-known in the Almería province of Spain. It appears in rock art panels of the region that date back approximately 6,000 years. In modern times it connotes magic and good fortune. In 2008, not long after Jacob and I started playing music together, we were privileged to visit one of these ancient sites on a stormy day in the foothills of the Sierra Maria near the beautiful village of Velez Blanco. We were so impressed by the experience, we wanted the name of our band to reflect the wonder of that place and the magical energy of that enigmatic figure. Such were the first stirrings of Indalo Wind. Since then we have been lucky to share our music with many people, in unique and wonderful venues. It has been one of the great joys of my life to conjure the tunes together, to share in each other's musical discoveries, and to carry our music out into our community and now, with this recording, into the world at large. Peace through music." -Eric Walter "To me, Indalo Wind is about making connections. From the beginning, it has been a way for me to connect with my dad. And it has been a way for us to fuse our different musical styles and interests. I bring my knowledge of flamenco and classical together with my dad's roots and native styles to create music that connects us to places we know and places we dream of knowing." -Jacob Walter.

Here's what you say about
Indalo Wind - Indalo Wind.