Nlx - In Your Face 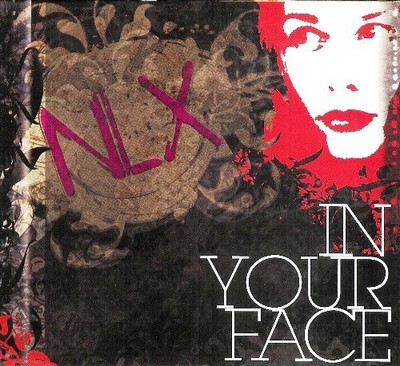 Just one hit is enough to hook you on the addiction that is NLX. The NY Times reckons: 'NLX traffics in unschooled, confessional, piano ballads.' To connect with her music is a rush like no other. Tension, then release ... NLX has been covering her tracks. Rumor has it she served her time in Hamilton, Ontario - a small steel town where the survivors are the fittest, and the smartest ... those brave enough to escape it's desperate clutches. So it was in the dives and hotspots of Toronto - clubs like El Mocambo, C'est What and The Drake - that she developed her signature sound ... a potent cocktail infused with Daniel Lanois, Tori Amos, PJ Harvey and NIN. Then forays to New York City where 2004's 'Meat Inspection Tour' established her as more than just a girl at a piano. "Trent Reznor with Tits," is what fans dubbed her, while the Songwriters Hall of Fame described NLX as "extraordinary, outstanding, compelling, distinctive and very, very special." Now a permanent fixture in the Big Apple, the NLX momentum is accelerating ... with gigs at the best NYC venues - Joe's Pub, The Living Room, Rockwood Music Hall - plus West coast action at Hotel Café in LA and Lestat's in San Diego. And she's still much in demand in her homeland, recently opening a 20-date cross country tour with David Usher, and with openings for the likes of Stabilo, Pilot Speed and Matthew Good 2006 saw the release of NLX: In Your Face and NLX: Behind Your Back, offering up heart-wrenching lyrics and dark piano melodies. Aggressive is the tone for In Your Face, co-produced in Toronto with Byron Wong (Crystal Method, David Usher). Meanwhile, Behind Your Back is more sparse, a product of a collaboration with Chris Brown (Bourbon Tabernacle Choir, Barenaked Ladies) at his Brooklyn studio. 'If great songwriting's your bag, both [NLX CDs] most definitely deserve a listen,' suggested Michael Gallant in Keyboard Magazine. The albums quickly gained strong approval from AAA radio across the USA and Canada, with regular spins on 70+ stations, a "One to watch" shout out on the nationally-syndicated Acoustic Café show, and high rotation exposure at XM 75 The Sound of Starbucks, which also hosted a coveted live performance. 'When I heard NLX, what really stood out was her amazing voice and her incredible songwriting. I then had the privilege of seeing NLX live, and she was even better than the CD,' commented Program Director Seth Neiman. NLX has also been featured live on numerous occasions at CIUT 89.5 FM Toronto, where Producer/Host Andy Frank attests 'NLX needs to be heard.' A recent musical guest on CBC Radio 1's nationwide GO program, NLX has been recognized by CBC's Newsworld as a "Powerful voice to watch," alongside breakthrough artists Amy Millan and Melissa McLelland.

Here's what you say about
Nlx - In Your Face.