Tyrone Birkett - In the Fullness of Time 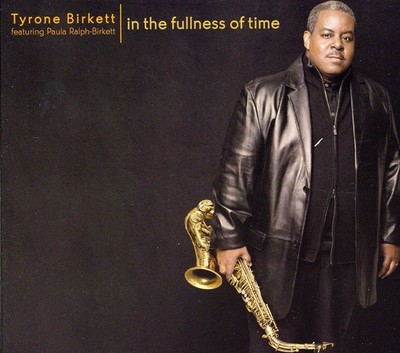 Tyrone Birkett In building bridges between styles with sometimes-questionable results, occasionally we get a pleasant surprise. One such surprise is the unique music of progressive gospel/jazz saxophonist, Tyrone Birkett. Progressive, because he uses contemporary gospel as a springboard and extends it through jazz & soul music. Unique, in that influences have been assimilated to produce something new but still familiar. "In The Fullness of Time" the debut CD release by Tyrone Birkett featuring vocalist Paula Ralph-Birkett is a manifestation of this approach. It brings together virtuosic but accessible saxophone improvisations, innovative jazz fusion spins on gospel standards, and soothing tone poems and ballads. Add to that, funky but smart groove tunes, and vocals alternating between powerful Dianne Reeves-like exhortations and intimate monologues. All of the selections are anchored by the attentive musicianship of New York's best up and coming jazz and gospel talent, with credits from Randy Brecker to Barbra Streisand to Lonnie Plaxico. All to bring to you the message of the music. The message is to encourage the listener to live this life fully and realize the reason for living. Jazz & gospel were born out a people persevering through poverty & pain, searching for a way to express themselves to their God, to each other, and to themselves. It is only fitting that jazz & gospel with their unique attributes, be used together to express hope & resolution. More to the point, the message communicates the character of the Creator. Though being the creator and sustainer of all that is, God is still concerned about the life and well being of one person. Or as John Coltrane stated in his text for A Love Supreme "God is all". Tyrone grew up in New York City and at the age of ten began studies on the saxophone, playing in the Holiness church on Sundays while studying Bird, Coltrane and Grover Washington Jr. every other day. At age fifteen, he had the pleasure to be invited to St. Peters Lutheran in NYC, the "jazz church" to play with a trio what was even then an interesting amalgam of gospel and jazz. And receiving the Louis Armstrong Jazz Award in high school furthered validated this style. Starting as a workshop to hear his compositions, Tyrone Birkett formed a group in an effort to present gospel music from a different perspective. 'Coming up I was equally influenced by jazz and contemporary gospel during the same period of my life, remarked Tyrone. 'No one was writing anything from that place, so decided to try it myself'. Equipped with instruction at the Aaron Copland School of Music under the tutelage of Budd Johnson, mentoring from Frank Foster and real life experience in churches, Tyrone has carried his message to venues such as the Brooklyn Academy of Music, Lehman College Center for the Performing Arts, Aaron Davis Hall, and Riverside Church to name a few. And appeared on stages with/opened for Kirk Whalum, Shirley Caesar, Al Green, Frank Foster, and even performed with Little Richard when he came to Harlem during one of his "gospel" periods. He also made a contribution to the movie "Proud" starring Ossie Davis in his last film performance. His commitment to social causes is evidenced by participation in AIDS Awareness events sponsored by Bristol Myers and the Arthur Ashe Institute. In time he felt impressed to take the music to a wider audience. He began by adding a vocalist to communicate easier with audiences and solidifying the musical concept. "I went back to study Thomas A. Dorsey, the father of gospel music, and his effort to combine sacred music with blues and jazz", Tyrone explains. "So I took what was organic and natural to me - Coltrane, jazz fusion like Herbie Hancock and Weather Report, 70s soul music and contemporary gospel, and had them all converge naturally, without forcing the issue." To further bring this music to the masses, he has produced events to provide exposure for the music such as 'GOSPEL NITE LIVE @ JUSTIN'S', a well-attended 'Gospel/Jazz Convergence' themed showcase at world-famous Justin's Restaurant in NYC, "Friday Night Freedom" a monthly afterwork gospel jazz event at the Harlem Tea Room, and the Gospel Jazz Convergence concert hosted by Sheila Anderson of WBGO-FM planned for Fall 07. This in addition to engagements at the NBA Cares/Ralph Lauren cancer awareness event, the upcoming Jazz BBQ at the Harlem Book Fair as well as festivals, jazz clubs, churches, etc. In support of the CD release 'In The Fullness Of Time'.

Here's what you say about
Tyrone Birkett - In the Fullness of Time.