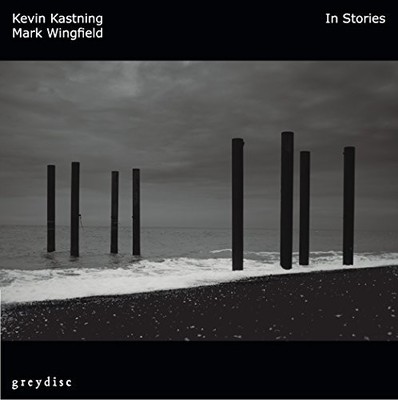 Kevin Kastning: 36-string Double Contraguitar, 17-string Contraguitar, 12-string Alto guitar, Classical guitar. Mark Wingfield: Electric guitar. 13 new compositions. Reviews for 'Dark Sonatas,' Kevin and Mark's 2013 Greydisc release: Dark Sonatas is named as one of the Best Albums of 2013 by Acoustic Music magazine. 'Dark Sonatas: Kevin Kastning / Mark Wingfield The world of experimental 20th century music is well over a century old. 20th century recording artists such as Edgard Varese, Luciano Berio and Wendy Carlos changed the way many music fans listened to music and although the 20th century is long gone, there's no turning back from the breakthroughs of music history. Another name familiar to most 20th century experimental music fans is Elliott Carter, who is perhaps metaphysically the subject behind Dark Sonatas, the 2013 CD from guitarist Kevin Kastning and his U.K. counterpart and fellow guitar collaborator Mark Wingfield. Known by astute music followers as the head of Greydisc Records, Kevin Kastning is not only a musical experimenter but he's also the inventor of many guitar breakthroughs, including (but not limited to) the 30 string guitar, which he implements to great effect on the Dark Sonatas CD. In contrast to Kastning's 30-string guitar styles, Mark Wingfield, on the other hand is an electric guitar practitioner in the spirit of Allan Holdsworth. If Miles Davis played electric guitar he might sound like Mark Wingfield. Thankfully, both guitarists are in top form on Dark Sonatas, which according to the CD liner notes is greatly impacted by the recorded works of Elliott Carter. It's quite interesting to note that Dark Sonatas was recorded between November 6-8 2012, one day after Elliott Carter passed away on November 5th, 2012. From the sound of things, do you think Wingfield and Kastning were channeling Carter's sonic seasonings? It's fascinating to note that for an album as unusual and experimentally challenging as Dark Sonatas, there's hardly a note out of place here. Unlocking a number of sonic covenants, Dark Sonatas is actually the second album on which Kastning used his 30-string guitar (the first was the album Nowhere, Now Here with Carl Clements) and the depth and breadth of the guitar sounds from both players is quite ear-opening. Featuring 13 tracks that clock in at 62 minutes, Dark Sonatas is quite dynamic in places yet for the most part, the mixing and mastered CD sound offers a clean and pristine soundscape. Experimental electric and acoustic guitar recordings have been quite popular since the 1970s days of messers Fripp, Frith and Holdsworth. Even so, on Dark Sonatas, Kastning and Wingfield bring the art of 21st century experimental guitar recordings to a whole new level of sonic excellence.' - MWE3.com Magazine 'KEVIN KASTNING - MARK WINGFIELD/Dark Sonatas: Not only is Kastning one of the greatest guitarists working today, he's one of the most fearlessly prolific as well. Just a few months after releasing another of his other duets, he's back again with a new duet with Wingfield, hardly seeming like it's been a year since the last time these guys went at it. A wild set where you don't realize there's only two of them raising such a racket, this is sort of minimalist and just shoots past all the regular sign posts your would judge this against. For the jazz lounge eon Pluto, this set is a mind bender that may or may not be from outer space. Wild stuff that takes the 30 string guitar to places you haven't thought about yet. A must for the musically fearless. ' - Midwest Record magazine; August 2013.

Here's what you say about
Kevin Kastning - In Stories.