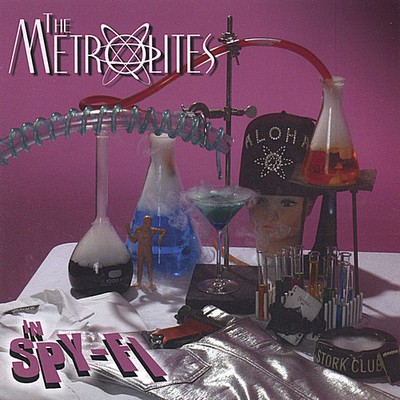 Spy, Noir, Surf, Lounge, Rock, Spaghetti Western, Easy Listening and Rockabilly have all been terms used to describe the ferociously eclectic sounds of The Metrolites... and they've often been used in conjunction to describe a single song! Their musical chops are displayed throughout their instrumental and song repertoire performed on Saxophones (Nervous Neal Smith), Guitars (Kathleen Gallagher), MalletKat (think digital Vibraphone),TrapKat (digital drum thingy) and Theremin (Scott Morschhauser), Bass (Devin Kirby-Hansen), and Drums (Josh Duffee). If a bizarre offbeat life had a soundtrack, The Metrolites would be composing and performing. Performance venues have been equally as eclectic, being the house band and playing the Copia Martini and Wine Bar in the Quad Cities one night and touring and playing a punk club the next. A recently overheard comment from a patron who wondered into the Copia says it all. 'How is this happening? This is wonderful'. As fan demand for recordings reached a fevered pitch, The Metrolites launched their debut CD 'The Metrolites in Spy-Fi' on the 'Go-Go Golem' label. 'Our goal is to release extremely high quality recordings as well as place music in TV and Motion Picture soundtracks' beams bandleader Scott Morschhauser. And how would Morschhauser describe the unique sound of The Metrolites? 'I don't know... maybe the sound of a band made up of the mutant combined DNA offspring of Ennio Morricone, John Barry, Martin Denny, Henry Mancini, and... Joey Ramone.' However you slice it, The Metrolites are not to be missed. When things are odd in your life, listen carefully and you'll hear The Metrolites playing your soundtrack. You might want to then see your doctor... immediately.

Here's what you say about
Metrolites - In Spy-Fi.