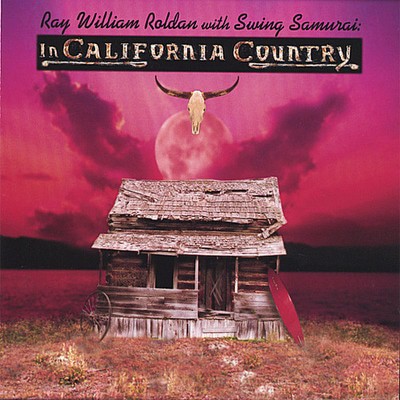 Singer, Song-writer, blue-collar artist, Ray William Roldan, meets an award-winning producer, David Jenkins ( Brian Wilson, Dionne Worwick,Tory Amos) and Hot shot Guitarist, Mark Hayes and Magic is Made. This album is a stunningly powerful tribute to a single songwriter's ability to inspire some of the Industry's most prolific and accomplished artists of our time: Doug Pettibone (Lucinda Williams & Jewel), Dave Chamberlain (Glenn Frey, Manhattan Transfer, etc), Christ Mostert (Eagles), John J.T. Thomas (Bruce Hornsby, Cafe R&B) and Richi Onori (Keith Emerson, Robbie Kreiger), Tyana Parr (REO Speedwagon). 'In California Country' has been envisioned by a multifaceted man, it's content as undeniably attractive as the history in it's making. Ray William Roldan was born in New Jersy though raised on the west coast. He is known as someone with something to say. The son of a French-Cuban outlaw biker and an English-German mother; life was wild enough then to lend material to Ray's lyrics now. As a mechanic, aerospace engineer, construction worker, and artist, Ray has witnessed life from every interesting vantage point. His music gives the listener a glimpse of this experience. Ray Roldan's deep knowlege of the Blues imprints itself upon the music, though this album can be determined to be true Americana. With Alternative Country and Rock artfully flavoring the melodies. Here is a landmark piece of music breaking all boundries of genre typing. An honest reflection of a man and his desire to bring lyrics to life. And he does so by applying an invigoratingly clever twist on words accompanied by superb musicality. Some accolades: Love the weepy pedal steel. You could teach these new country boys a thing or two about, like Gram Parsons and Merle Haggert. Take care and rock on! Alameda Band ____ Awesome songs! You have new fans in Canada! I absolutely love Louise. I've listened to it a few times already. Keep up the great work. [email protected] Canadian Music Rock (live music radio)___ I really like your style and sound. 'Whiskey Chains' is superb, really mellow, with excellent production. Jim - band: Darkside__ Immaculate swingin' country...we love it, especially the steel. Keep spreadin' that Swing Samurai gospel bother. Rawk awn!!! Swayback band ___ I like what you've got going on and think that you have a real driving force behind your music. Awesome music!!! I'm really impressed, it blows my mind everytime I hear such undiscovered talent. Boxo music, Artists for Artists____ Your music meets with the approval of the Fame Games producers. Congratulations! The Swing Samurai song, 'Man of Steel' will be featured in edition 85 (May 31 - June 7). We can't wait to play it! Thanks for information on your powerful cast of musicians. Fame Radio, Spain____ A simple run-down of who does what on 'In California Country' is as follows: Dave Jenkins; engineered and sometimes produced for; (Dionne Worwick,Tory Amos, Jack Mack and the Heart Attack and countless others). Dave heard the song material Ray created and developed the itchy finger syndrome that happens to engineers. 'What I could do with this!' flashed across his mind as a producer. Mark Hayes (four CD's of his own) added his effortless riff and rhythm chops contributed to make powerful songs. Then add to this mixture the incredible talent of Doug Pettibone (Lucinda Williams & Rick Montgomery), Chris Mostert (The Eagles and others), Dave Chamberlain (Glenn Frey, Manhattan Transfer, Bruce Willis, Pointer Sisters, Lyle Lovett, Carol King, Joe Cocker), John J.T. Thomas (Bruce Hornsby, Cafe R&B) and Richi Onori (Keith Emerson, Robbie Kreiger, Larry Graham, Rick Derringer, and Richie Sambora and more). There are the back up vocals by Christina Linhardt, (with her own album and performances all over Europe), or Tyana Parr (REO Speedwagon and others), and Francesca (with her own album and is a member of the band, 'Some Like it Hot') and Promise (as a voiceover in 'Osmosis Jones' and other exstensive work).

Here's what you say about
Raymond William Roldan - In California Country.