The Minni-Thins - In Black Cause I Asked 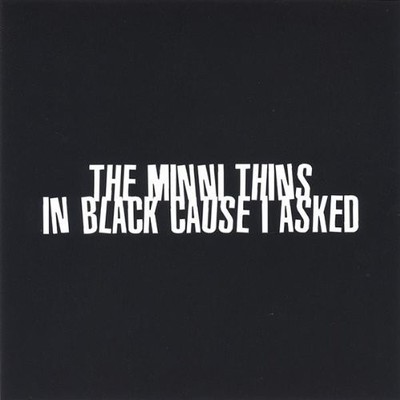 Origivation Magazine said: 'Upon first hearing In Black Cause I Asked, one might find themselves trying to duck and cover from the barrage of cowbell, screeching guitar and synth, and schizophrenic vocals. But after the initial aural assault, once the listener gets a chance to settle in to the music, a method behind the madness becomes quite clear. The Minni Thins are a completely fascinating band; their new album an embodiment of punk rock irreverence. Their originality, their cutting sense of humor and sarcasm recall the earliest of punk bands, but their sound is something considerably more modern.' South Of Mainstream said: 'They play their own unique blend of punk-rock-country music, that in this day and age there just isn't enough of. With solid feedback and most songs clocking in around the two and a half minute mark, these guys pack a wallop.' Collective-Zine said: 'Woah! Some pretty fuckin' rowdy rock n' roll here from the Minnie-Thins, whoever the hell they might be. Proceedings are kicked off in fine form with Liquor Store, a simple, cowbell-led four-chord blueser that stomps and snarls in precisely the right places and sets us up well for the dishevelled shenanigans to come. Much of the record skulks around the periphery of whatever dimly-lit, boozy den you might find yourself in if you merged De Stijl-era White Stripes with something like the Catholic Boys, mingling punky blasts with drunken slide guitars and rudimentary puffs at the harmonica for something that couldn't really fail to be a blast if it tried. Despite the raw energy and unhinged Zed-from-Police-Academy vocals, someone in this band seems to have a shaky hand on what might once have been pop hooks, only they've been rudely wrassled to the floor and kicked hard in the crotch, battered senseless so's to fit in with everything else in this charming if somewhat unruly mess. Needless to say, with tunes as good as Methadone and a whole bunch besides the sloppiness isn't just forgiven, it's positively revelled in.' American UK said: 'Jumping around like a Jack Russell terrier on both crack and a trampoline, this indie-rock selection box never stays still long enough to be pinned down. There are bursts of Pixies style melodic noise, older style agit-punk; I'm thinking, No Means No, some They Might Be Giants or Dead Milkmen style nonsense-rock and even some Americana stylings in the vein of Ween... it's good to know that the spirit of cartoon punk championed by the Descendents still beats in the hearts of American youth.' Burning World said: 'If you like your music dirty and loud then The Minni-Thins are just the thing for you. I don't really like comparing bands to other bands but if you imagine some kind of Pavement/Pixies hybrid you'll be about there. 'Let Me Be Your Liquer Man' is a classic piece of garage raaawwwk. I just wish somebody would come and make sounds like that in my garage!' Lostmusic said: 'So, on The Minni-Thins website - there are a host of songs that are available as downloads. I suggest you jump your arse to the website and start with the swamp stomp of 'Let Me Be Your Liquor Man'. Which conjures up images of a band hard at work in their garage - churning out noisy guitar songs - for fun. Which could be pretty accurate. I like. A lot.' Cin Weekly said: 'In Black Cause I Asked is a hard-core rock album that's got one foot in classic punk rock and the other in esoteric Pixies-style garage rock. It's big and glorious and hard to take off repeat.' Citybeat said: 'The songwriting is loaded with an animated catchiness, but the enthusiasm behind every note is even more addictive. When you listen to the songs, you can vividly picture the band bouncing off the walls like a cage full of monkeys on double banana day. The Minni-Thins take screaming back from the Emo kids and make it not only palpable but downright tuneful. Singer/guitarist Jeremy Strickland has some of the best screams in local music, even making them key hooks in many songs (one listen to 'Jean Skirt' and you'll be scream-humming his 'Jean skirt!/T-shirt!' squawk all week).' The Cincinnati Enquirer said: 'The Minni-Thins' irresistibly raucous sound (just try to shake 'Let Me Be Your Liquor Man' out of your skull), punctuated by Strickland's raptorial screams, owes a strong debt to old-school punk. The wide-ranging influences of the band's six members, however, drive their music in sophisticated directions.'

Here's what you say about
The Minni-Thins - In Black Cause I Asked.