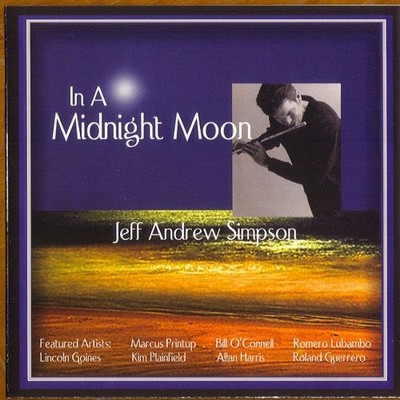 Jeff Andrew Simpson has been delivering the message of jazz through his performance, compositions and arrangements, and his voice as an educator for almost 15 years. He does all of this with conviction because jazz is not merely his music; it is his life, his spirit an affirmation of his faith, and his philosophy. It is no surprise then, that this outstanding compilation of music is an authentic representation of the personal and artistic development of a truly gifted jazz musician. And what a way to begin his recording career! Growing up as the son of jazz disc jockey and concert producer Jack Simpson laid the foundation for Jeff's career in jazz, when at the age of 10, he met musicians such as Ira Sullivan, Howard McGhee and Dizzy Gilespie. He then began piano lessons, guitar two years later, and joined the Jr. Messengers, a 60 member interracial singing group designed to spread brotherhood that was founded by his mother. At age 15, he began writing songs and soon discovered his passion for music. After a brief attempt at a career in professional golf, Simpson refocused on music, jazz in particular, taking up the saxophone. He soon carved his niche as a premier performer with his broad tradition filled sound on tenor saxophone and his haunting nuance on the flute. Jeff's concept of performing jazz was formed and ingrained through countless performances by his mentor, jazz legend Ira Sullivan. ' Every time I watched Ira play, there was an unmistakeable magic happening on stage and with the music. I wanted to be a part of that'. Starting with jam sessions with his mentor, he suddenly found himself in the role of leader and was hooked. He found great success leading jazz groups at major concerts and festivals throughout Florida. Here, he has brought together an impressive group of musicians that create a sound that is both energetic and moving. Pianist Bill O'Connell has performed with Mongo Santamaria, Sonny Rollins, Chet Baker, Dave Valentin, Gato Barbiera and more recently with vocalist Jon Lucien. Trumpeter Marcus Printup, a 10 year veteran with the Lincoln Center Jazz Orchestra, has 5 CDs to his credit and is considered one of the foremost performers on his instrument. Bassist Lincoln Goines, has a long list of credits including Eliane Elias, Dave Valentin and most recently with Mike Sterns. Kim Plainfield on drums has performed with some of the best musicians in the world and continues his teaching ventures at the Berklee School of Music. On two of the tracks Simpson has added the brilliant and much sought after Brazilian guitarist Romero Lubambo, and percussionist Roland Guerrero, which adds just the right spice to this diverse collection of tunes. Internationally renowned vocalist Allan Harris rounds out the cast with his beautifully rich rendering of a sure to be Standard, as you will hear on Daddy's Lullaby. Look what they're saying about 'In a Midnight Moon' Jay Edwards of Atlanta's leading Jazz station WCLK, says, 'In a Midnight Moon is a warm breeze that embraces your heart. The versatility of Jeff Simpson as musician captivates the listener with his sensuous bossas, 'Penumbra', and holds your attention with mainstream cuts like 'Blues in the Midnight Moon', and gives this new release a cutting edge bar none.' New York DJ Leo Rayhill of WCNY since 1961, adds, 'In a Midnight Moon reflects musicianship of the highest quality and Simpson's compositions and arrangements are beautifully written. His CD is outstanding!' Cadence Magazine's Frank Rubalino, in a recent review states: 'He guides the session through the straight forward channels of light improvisations and upbeat tempo to make a positive statement on the tradition of Jazz. Simpson emits a robust tone on tenor, soars gracefully on flute, and regularly establishes the finger-popping atmosphere that characterizes the set.'

Here's what you say about
Jeff Andrew Simpson - In a Midnight Moon.