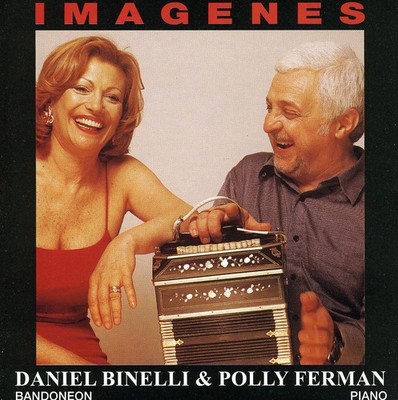 Binelli and Ferman continue to develop and further the appreciation of tango, milonga, candombe, and other Latin American musical forms in a unique bandoneon / piano partnership. Since making their American Duo debut in January 2000 in New York City, they tour extensively and have performed throughout the Far East, including the major cities of Tokyo, Beijing and Shanghai, as well as in Australia, Switzerland, France, Portugal and they have appeared in New York City, Chicago, Colorado, Dallas, Fort Worth and Miami in the U.S. Their performances reflect the elegance and subtlety of the Tango, the sauciness of the Milonga, the romance of the Waltz, and the temperament and power of contemporary Tango. The Duo has recorded the CD 'Imagenes,' which is available on Romeo Records and EPSA Music, and 'ORQUESTANGO', with the Montevideo Philarmonic. 'Masterly wedding of authentic native impulses in the context of a refined classical construction' (LA NACION - Buenos Aires) DANIEL BINELLI Daniel Binelli, internationally renowned composer and master of the bandoneon, performs extensively throughout the world. Since his successful 1998 tour of Japan with the National Symphony Orchestra of Argentina, he has been a sought after soloist in the Far East as well as in Europe and the Americas. In October 2001, he appeared with the Montreal Symphony Orchestra at Carnegie Hall under the baton of Charles Dutoit. At the invitation of Maestro Dutoit, he appeared with the Australian Symphony Orchestra in September, 2003 in Sidney and with the Philadelphia Orchestra in February 2004. In 1989, Mr. Binelli toured Brazil, Chile, Germany, Spain, and France with Astor Piazzolla and his New Tango Sextet. Binelli's knowledge of Tango has earned him the most respected proponent of Piazzolla's musical legacy. He has recorded over 30 CDs with whom he worked for 14 years. Daniel Binelli is the Musical Director of Tango Metropolis as well as the Binelli Quintet. 'Mr. Binelli brought florid virtuosity and high-pressure emotionalism to 'Aconcagua' New York Times POLLY FERMAN One of world's leading interpreters of the music of the Americas, POLLY FERMAN continues to captivate audiences with her outstanding performances of the music of Piazzolla, Villa Lobos, Ginastera, Gottschalk, Nazareth and Gershwin. Her mastery of this literature prompted The Japan Times to recognize her as a 'Musical Ambassador of the Americas'. Trained as a classical pianist, Ms. Ferman has appeared with the Indianapolis Symphony, Tokyo City Philharmonic Jarkow Philharmonic (Ukraine), as well as the symphony orchestras of Manila, Sao Paulo and the National Symphony of Argentina. Her performances in recital have taken her from her native Montevideo to Rio de Janeiro, Buenos Aires and New York, as well as to Paris, London, Berlin, Rome, St. Petersburg, Jerusalem, Tokyo, Manila and Beijing. She has recorded extensively and her highly praised 'Habaneras, Milongas, Tangos' is available on Romeo Records. 'Ferman ´s pianism is superb and of a kind no longer common'. American Record Guide Manager for the USA Beverly Wright & Associates, Inc email: [email protected] phone: (1212) 877-2036 - fax (1212) 877 2292.

Here's what you say about
Daniel Binelli & Polly Ferman - Imagenes.