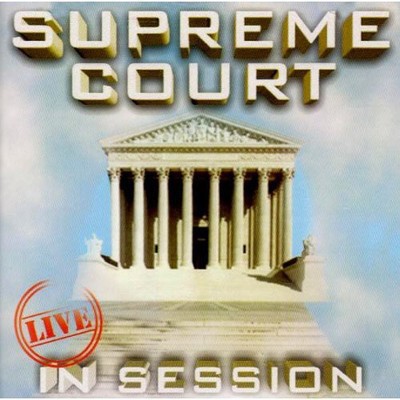 When stars collide they form what is known as a supernova. SUPREME COURT is a supernova! Five central Jersey-based musicians, each a star in his and her own right, combine their talents to radiate blues, funk, fun, and frolic to the Nth power. A SUPREME COURT date is not so much a gig as it is an unscripted, bubbling cauldron waiting to explode with creativity, special guests, humor, and superb musicianship. All selections are seamless, although they are improvised and arranged on stage. The band's sound is always fresh and serendipitous. Blues artists like Johnny "Clyde" Copeland, Sonny Rhodes, Ann Rabson (Saffire - the Uppity Blues Women), Smokin' Joe Kubek, Bobby Radcliff, and commercial artists such as Glen Burtnik (Styx), the Spin Doctors, Bernie Worrell (Parliament/Funkadelic), Vinnie "Mad Dog" Lopez (E Street Band), and Lenny Kaye (Patti Smith Band) have dropped in to play with Supreme Court. All of the musicians in SUPREME COURT are veterans of the East Coast jazz, blues, and rock scenes. Band leader 'Big Nancy' Swarbrick is known as a prime mover in the tri-state area blues scene, bringing players together, organizing benefits, and making music happen everywhere she goes. Former Albert Collins guitarist Debbie Davies writes, '(Nancy is) one of the rare breed of really good female harp players. She has toured in the past with lots of big names, and garnered a lot of respect. There's no fluff; this is a real deep blues harp player.' Nancy has appeared on stage with the legendary blues forefathers Willie Dixon, Sammy Price, Honeyboy Edwards, Jimmy Rogers, Pinetop Perkins, Clarence "Gatemouth" Brown, and Hubert Sumlin, and with more contemporary blues artists such as James Cotton, Ronnie Earl, and Taj Mahal. But blues is not all that Big Nancy plays: she has been seen wailing back to back with E Street band member Clarence Clemons and has sat in with the Spin Doctors, Warren Haynes (Government Mule), Stanley Jordan, Levon Helm (The Band), Jimmy Vivino (Max Weinberg Seven), Southside Johnny, Rock and Roll Hall of Fame inductee Bernie Worrell, and David Johansen (Buster Poindexter, New York Dolls). BERNIE BRAUSEWETTER'S blistering guitar weaves a web that is the band's sound. His depth has earned him legendary status -- he is known throughout the industry as a 'guitar player's guitar player.' He has won the admiration of the stellar guitarists that he's sat in with: The Allman Brothers' Warren Haynes, Sid McGuinnes, G. E. Smith, Steve Vai, Smokin' Joe Kubek and the late, great Johnny 'Clyde' Copeland. With his trio, BB and the Stingers, he has opened for Johnny Winter, Noel Redding, and Danny Gatton. 'BB' and his Stingers are currently signed in Europe with Dixie Frog Records. Bernie also plays guitar with Vinnie Lopez and Steel Mill. YOLANDA BRIGGS was born in London, England, and was raised as a singer in her father's church in Trenton, New Jersey. Her sultry yet powerful vocals reflect her hard-hitting influences. Close your eyes and you will hear Aretha Franklin, Irma Thomas, Etta James, Whitney Houston, and Denise La Salle riding in on Yolanda's soulful styling. Yolanda has appeared on the stage of the prestigious Apollo Theater and with Gospel host Bobby Jones. She has stood toe to toe with the best in the business with great result, including E. C. Scott, Shemekia Copeland, and Jeannie Bryson. Raised in Sheffield, England, drummer RON HOWDEN is the consummate professional and has played all over the world. Working his way up from skiffle bands in Sheffield, Ron backed the likes of The Everly Brothers, The Ink Spots, and The Platters before joining the British progressive rock band Nektar. Nektar was the first band signed to Frank Zappa's Bizarre record label. They scored platinum albums in the eighties and have enjoyed a 20-year cult following. Nektar is currently enjoying a resurgence . The band toured England, Germany, Chile, and Brazil in 2006. Ron has played with Papa John Creach, Rick Danko, Johnny Winter, Vangelis, The Everly Brothers, Roscoe Gordon, and Joe Cocker. But the most impressive feather in his cap is the sit in date he did with Jimi Hendrix!! SUPREME COURT welcomes it's newest member, bassist Dave Carta. Dave has recently departed corporate America and has entered the realm of the full-time musician. Even so, this much-sought-after bassist is no stranger to the club scene. Dave has been playing out since 1982 with pop/rock band Green Marie, jam/rock project Flint Michigan, and funk band Yooj. Bernie Brausewetter has also recruited Dave to play in his blues/rock power trio, BB and the Stingers. Recently Dave sat in with jazz legend Stanley Jordan. SUPREME COURT's CD was voted the number one release of the year by Chris Jordan of central Jersey's Home News Tribune. Live In Session is a sequence of live recordings from area nightclubs. It captures the spontaneity and wry sense of humor that the band is noted for. Selections include soulful renditions of Etta James' blues; Louis Jordan's swing; a raucous, tongue-in-cheek version of the country standard 'Mystery Train'; and a mind-blowing, jazz-influenced deconstruction of Willie Dixon's 'Live The Life I Love.' SUPREME COURT was formed in 1992 at the legendary Court Tavern, in New Brunswick, New Jersey. Ron Howden says, 'The name SUPREME COURT evolved with us. We formed the band in a hip musicians' club named the Court Tavern, but it's not all about that. SUPREME COURT suggests a higher power. It's a constant reminder that although it's important for us to be true to ourselves, it's equally important for us to be true to the music and all of the greats that came before us -- Diz, Coltrane, and the like. They set a standard that we strive to uphold. After all, this is the ultimate court.' The band members demonstrate this philosophy each and every time that the ... SUPREME COURT IS IN SESSION!

Here's what you say about
Supreme Court - Live in Session.