Bobbi Carrey - If I Loved You 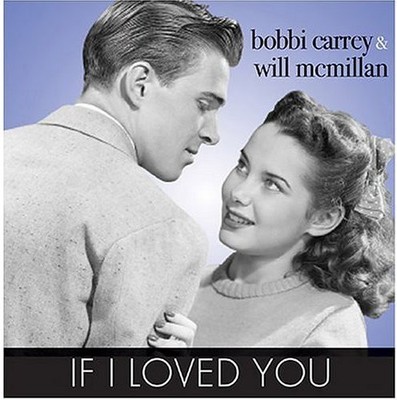 IF I LOVED YOU BOBBI CARREY & WILL MCMILLAN If love is the answer, could you please rephrase the question? Lily Tomlin Gravitation cannot be held responsible for people falling in love. Albert Einstein To love oneself is the beginning of a life-long romance. Oscar Wilde Everyone seems to have something to say about love - Writers, scientists, inventors, cartoon characters and of course composers and lyricists. Regardless of the time or the place, love songs seem to range from passionate to parental; romantic to raunchy; sacred to sarcastic. Bobbi Carrey and Will McMillan perform songs by Rodgers, Hart & Hammerstein, Stephen Sondheim, Amanda McBroom, Irving Berlin, Jonathan Larson, Johnny Mercer and others in a musical celebration of love; unrequited, requited and not-so-requited. Bobbi Carrey & Will McMillan, vocals Doug Hammer, piano and synth Jane Hemenway, violin Johann Soults, cello Kenny Wenzel, trombone Mike Monaghan, tenor sax and flute Mark Carlsen, acoustic bass Gene Roma, drums and percussion Produced by Bobbi Carrey & Will McMillan Recorded and engineered by Doug Hammer at Dreamworld Productions, Lynn, MA Mixed by Jon Lupfer at Q Division, Somerville, MA Mastered by Jonathan Wyner at M Works, Cambridge, MA Musical Arrangements Michael R. Callahan Creative Advisor Jonathan Wyner Designed by 2communiqué Artists' Photographs by Paul Forlenza WHAT PEOPLE AND THE PRESS ARE SAYING... Will McMillan has a voice of silk, a clear mind, and a poet's heart. To listen to him sing is a lesson in the elegance of simplicity. It's the truth. Bobbi Carrey's voice breaks my heart. It's purity, it's warmth, it's sincerity, and the heart that moves behind it, make her singing an act of healing and an act of joy. AMANDA MCBROOM, COMPOSER 'THE ROSE' Sentimental but not at all schmaltzy, 'If I Loved You' transported listeners into a daydream, blurring the lines between romance, wit and melancholy. Now that's amore. AIDEN FITZGERALD, BOSTON HERALD We do three hundred and fifty events a year in our venue. Sometimes we get tired and sometimes we want to go home. But tonight -I wanted the Bobbi Carrey and Will McMillan show to go on forever. MICHAEL MORAN, EXECUTIVE DIRECTOR, THE CENTER FOR ARTS IN NATICK, NATICK, MA Will McMillan and Bobbi Carrey were fabulous -I was riveted. Clearly a cult has started and is growing. SHERRY SMITH, WATD-FM 95.9 FM Winter Dreams... Scullers brings in local cabaret avatars Will McMillan and Bobbi Carrey on February 11, 2004. JON GARELICK, THE BOSTON PHOENIX Bobbi Carrey and Will McMillan clearly have what it takes to deliver history with the songs, as well as terrific chemistry as a duo....When they harmonize they sound absolutely beautiful, their voices blending in perfect balance. WENDY KUPFERMAN, CABARETHOTLINE.COM 'If I Loved You' was outstanding and brilliantly done. You both touched my heart and soul with your singing and presence. PRUDENCE HUMPHREYS, CAMBRIDGE, MA What a beautiful, inspiring and moving event...the musicians and the songs were nothing short of superb. CAMBRIDGE COLLEGE 30TH ANNIVERSARY EVENT, POCANTICO HILLS, NY What a wonderful show! I was very moved by old favorites and new favorites. You both are incredible together--the harmonies, the crafting, the complementarity. If you enjoyed performing just a smidgeon of how much I enjoyed being there, you are richly rewarded. ANN MARIE HAYES, MEDFORD, MA Bobbi Carrey & Will McMillan are fabulous! We just loved (no pun intended) your show, 'If I Loved You.' You both are truly magic together! ANDREA & EMMANUEL DASKALAKIS, BOSTON, MA ABOUT THE ARTISTS... BOBBI CARREY Through her company, nowandthen Productions, Bobbi Carrey offers cabaret performances combining social history with popular American song. Her shows range from Irving Berlin: The Voice of Everyman to Give My Regards to Broadway. In December 2002, she released her own CD, BETWEEN THE WARS: Music from 1918-1941, to sold-out crowds and was featured in the Boston Globe, the Boston Herald, and the Cambridge Chronicle. In 2003 she was one of thirty-six participants selected from nationwide auditions to attend the Cabaret Conference at Yale University. Her prior musical experiences have ranged from folk singing to summer stock, from Reno Sweeney in Anything Goes to soloist with the Mystic Chorale, from Christmas Revels to a women's vocal trio called 'The Mood Elevators.' She has performed throughout New England, including CabaretFest! In Newburyport and Provincetown, Club Cafe, Blacksmith House, Encore Lounge, Center for Arts in Natick, Harvard Pops, Scullers Jazz Club and at many private parties and events. In 2003 she was featured live on Ron Della Chiesa's The Jazz Songbook on WGBH radio. Bobbi has done so much for and with the American Songbook. Her vocal interpretations and appreciation of the 'story behind the song' makes her one of our most precious and important performers! -Jordan Rich, WBZ Radio, Boston, MA WILL MCMILLAN Singer, songwriter and cabaret promoter Will McMillan performs all over New England with singer Bobbi Carrey in shows about Irving Berlin, Richard Rodgers, Broadway and Hollywood. A founding member of the Boston Association of Cabaret Artists (BACA), McMillan has been featured on WCVB's Chronicle and WGBH's Greater Boston Arts. For the past three years he has produced a sold out series of concerts, Will & Company, to showcase local singers and composers - earning a 2002 IRNE award from the Independent Reviewers of New England for Best Cabaret Performance. He has attended both the Eugene O'Neill Theater Center's Cabaret Symposium and the Cabaret Conference at Yale. In addition to his solo shows, McMillan also performs with 'At The Movies,' an evolving revue that celebrates music from the movies. The quartet received a 2003 IRNE for Best Cabaret Group Performance from the Independent Reviewers of New England, and released their first CD, REEL ONE, to a sold out crowd at Scullers in 2003. 'There aren't enough superlatives to give McMillan his dues. What a voice. What delivery. He owns the stage even when he's still as a whisper. Isn't that what cabaret is about?'-Beverly Creasey, Theater Mirror.

Here's what you say about
Bobbi Carrey - If I Loved You.