Utah Phillips - I've Got to Know 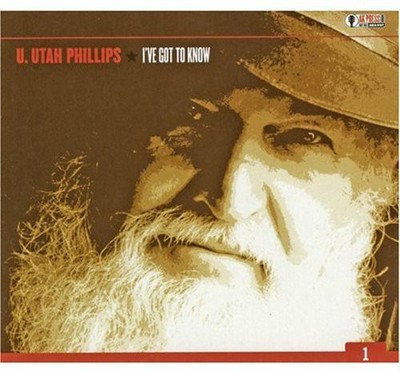 Utah Phillips has crafted a fascinating show out of his life. In the course of seventy years he has labored as a dishwasher, archivist, printer, and warehouseman; soldiered in the Korean War; lived as a tramp (he is still a Grand Duke of Hoboes), and for the past 36 years made his way telling stories and singing songs. He has the wit, humor, bite, and intelligence of a Mark Twain or a Will Rogers, and behind his 'Everyman' appearance is a consummate artist. Peppered with one-liners and offhand philosophical commentary, Utah's revealing stories, about such spirited American characters as Charley Goodnight, Mother Jones, and Idaho Blackie, tell our true history and connect us to American traditions that are genuinely ours. Utah Phillips is described as 'a national treasure, a writer of haunting songs, a storyteller of hilarious presence and subtle depth, a union organizer, historian and scholar, a Celtic-Yiddish bard, a Pleistocene bon vivant, a post-modern ne'er-do-well, and a heck of an engineer.' A 40-year member of the Industrial Workers of the World, he is the most entertaining labor troubadour of our time, leading his audience on an emotional rollercoaster with side-splitting storytelling and fire-breathing working class songs. According to one reviewer, 'Phillips exemplifies some of the traits which Americans most value: an open and inquisitive mind, a daring heart, and a sharp but humorous tongue.' The Boston Globe said, 'Phillips above all is a consummate showman, a master of the theater...Phillips has a genius for making people laugh and care at the same time.' He is the recipient of the Lifetime Achievement Award presented by the North American Folk Alliance, the Lifetime Achievement Award from the Western Labor Heritage Foundation, and the Joe Hill Award from the Labor Heritage Foundation-AFL-CIO, among many others.

Here's what you say about
Utah Phillips - I've Got to Know.