Von Garcia - I Think a Think 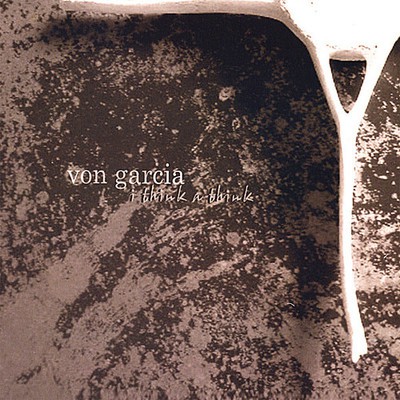 Von Garcia: Crossing borders, musical explorations transcending genres, soundscapes, free form improvisation, meditations... ...ambient noise rock Formed by James von Buelow and Damon Trotta in 2006, von Garcia has become central to the NYC-based Sluggo's Goon Music label. Von Garcia's first release "i think a think" is a collaborative musical collage featuring members of Vehicle, Riotgod and At War With Self. The album also includes a stunning solo by NYC guitarist Ben Monder. Von Garcia's noteworthy innovation is a touchstone of the SGM label: bound by lack of boundaries. The making of von Garcia - i think a think The beginning... After 15 years of musical hiatus, James von Buelow resumed playing guitar and composing in late 2005. In six months he had over 2 hours of material, music that would make up the entire i think a think CD. Second movement... James brought the music to bassist/composer Damon Trotta and the collaboration began. Damon deconstructed, reconstructed, manipulated, augmented and reformed the compositions. Then... Drummers, vocalists, guitarists and mandolinists were brought into further enhance the pieces; everyone was given complete freedom in their input. No melodies were dictated, no beats demanded, no guitar parts restricted. The musicians left to do what they do. The idea was to serve the music. The guests included NYC avant-garde guitarist Ben Monder, Riotgod's Mark Sunshine and members of the SGM collective, At War With Self's Glenn Snelwar, Vehicle's Steve Decker and Vehicle/The Gas' Pete Teresi. Worth noting was the improvisational/computer based production. Tracks we're sent back and forth online. Transferred between Logic, ProTools and Sonar yet all instruments were improvised and live. There are some sequenced loops here and there but all instrumental performances were created live on the spot and the record plays as a live performance, except where obviously intended. This record was being created concurrently with At War With Self's - Acts of God, an entirely different album with a creative relationship to i think a think. They are albums on opposite ends of the spectrum, both defying genre, yet Glenn Snelwar's contributions to i think a think and James' to Acts of God as well as Damon's playing/production on both, bridged the 2 worlds. Alternate mixes of one song, Ursa Minor, ended up on both records while a song written for i think a think ended up on Acts of God. In that way, this is a companion to Acts of God. This also speaks to the diversity of the collective and what they we're able to achieve in such extremes. Von Garcia lands somewhere in an area hard to define, it is something that has it's own direction, it's own voice and feel. ' i think a think is very comfortable not fitting comfortably into any one genre. Music without boundaries, that was and continues to be the idea' says von Buelow. Damon adds, 'If I gotta talk about sounds, it plays like water. It washes over you but it'll still shine up a stone or turn the highest mountain to sand with plenty of colors in between. You want comparisons don't you? The cliff notes should read, see: Pink Floyd, King Crimson, David Torn, Fusion Miles, David Sylvian. Would you call it 'Art Rock'? Well, James caught a buzz off Jackson Pollock at MOMA and channeled JP Splatter, so why not?' von Garcia, the third official release on Sluggo's Goon Music is being made available for free. Why? This is the birth of the label, so it was decided to use this as an introduction to what's to come, a way get people on the SGM site to see what's going on. It will be available as a free download on SluggosGoonMusic.com or for $5.00 if you would like a CD. Sluggo will, of course, accept donations if you are so moved to support the artists. Depending on the success of the 'on your honor' system, this could become the new distribution model for SGM. Von Garcia is currently assembling a working band for performances in the NYC area in 2008. The shows promise to be improvisational and experimental, borrowing from the record but focused on exploring new territories between improvised jazz, rock and ambient. This record helped solidify the concept of Sluggo's Goon Music, a small, hand-crafted record label with a diversified and exciting collection of bands, which was formed by James and Damon shortly after this collaboration. i think a think, a record that defies most categorization does fit squarely into one, the SGM credo, bound by lack of boundaries.

Here's what you say about
Von Garcia - I Think a Think.