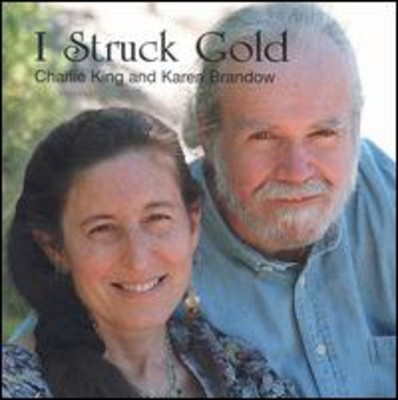 'I Struck Gold' is the much-anticipated debut duo CD by Charlie King, critically acclaimed for his solo records on the Flying Fish label in the 1980s, and his new musical (and personal) partner, Karen Brandow. Charlie and Karen's repertoire on 'I Struck Gold' covers three continents, two languages and more than forty years of song selections, performed with sweet harmonies and vibrant musicianship. Described by Pete Seeger as 'one of the finest singers and songwriters of our time,' Charlie King has been at the heart of American folk music and activism for over 35 years. He is a musical storyteller and political satirist whose central mission is to infuse audiences with a sense of optimism and possibility about the future. His songs have been recorded over the years by such performers as Holly Near, Ronnie Gilbert, Pete Seeger, Arlo Guthrie, and John McCutcheon. He has released a dozen solo albums since 1976 and three albums with his group Bright Morning Star. King's musical activism on behalf of peace, human rights, and environmental sanity earned him the War Resisters League's Peacemaker Award in 1998, and Pete Seeger nominated him for the Sacco-Vanzetti Social Justice Award, which he received in November 1999. Karen Brandow, another musician with a social conscience, has been performing with Charlie King since 1998. She began singing and playing guitar as a teenager in the US. While doing human rights work in Guatemala from 1986-1994, she studied voice and performance at the Angelica Rosa Academy of Performing Arts and classical guitar in the National Conservatory of Music. She wrote a book about the Guatemalan labor movement called 'The Sky Never Changes,' published in 1996 by Cornell University Press. 'I Struck Gold' features songs about love, labor and social justice, conveyed with passion, sincerity and humor. Among the CD's highlights are the beautiful Malvina Reynolds composition 'I Cannot Sleep' (with Charlie and Karen trading lines in English and Spanish), the exuberant title track, and 'Que Sera de Mis Hermanos,' a haunting song of exile about the US-backed coup in Chile. King and Brandow also perform songs poking fun at Jerry Falwell ('Tinky Wink,' which turns dark with a pointed reference to the gay martyr Matthew Shepard) and a welcome mishap at the Macy's Thanksgiving Day Parade a few years back ('Barney'). Two songs by the late and much-missed Steve Goodman are also included - the ruefully good-natured 'The One That Got Away' and the starkly tragic 'The Ballad of Penny Evans.' Musicians featured on the CD include Charlie and Karen on guitars and vocals, Len Wallace on accordion, fellow Appleseed Recordings artists Kim and Reggie Harris on guitar and vocals and Brian Melick on drums and percussion.

Here's what you say about
Karen Brandow - I Struck Gold.