I Still Got It 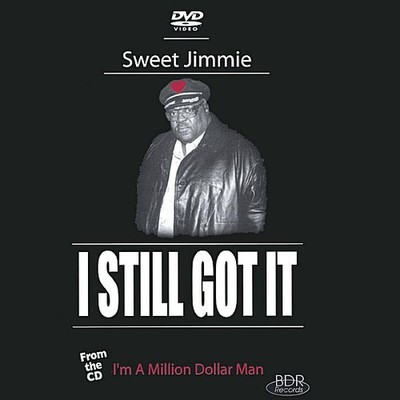 Sweet Jimmie's first CD on BDR Records, 'Sweet Jimmie Sings The Blues', was produced by Marvin Holmes with a host of stars such as Barbara Lynn, Jesse James, Vernon Garrett, Al King, Barbara Morrison, Carl Robinson, Larry Van, and himself Sweet Jimmie singing,:'Hoochie Coochie Man' and 'Mannish Boy'. Jimmie Ward, born in Monroe, LA., and has been in the entertainment business for 30 years. In 1962, Jimmie used to party at a club called Ray's 4500 Club, located at 45th & Market and always had a lot of women with him. A bartender named Mac Pennywell encouraged him to start bartending. He said, 'Jimmie you would make a hell of a bartender with all the ladies you have around you, you would have a full house'. That's how Jimmie got started in the Club business. He also was a bartender at the California Hotel and he started the first go-go girls at the North California Hotel and Slim Jenkins in Jack London Square. In 1969 Jimmie started his own business at the Lampost at 23rd and Telegraph in Oakland, CA. He also worked as Longshoreman in Seattle, WA. He had the Lampost from 1969 to 1975. 1982 he opened up Sweet Jimmie's. He got the name Sweet Jimmie in 1964 after being in the hospital and pulling thru a very serious injury from the ladies who called him, 'Sweet Jesus'. When the CB radios were popular, they called him, 'Sweet Jimmie'. He opened a CB Club serving beer and wine on Grove Street and that's when everybody started calling him Sweet Jimmie. From 1987 to 1989, Jimmie opened Jimmies on 17th Street. The Club was closed down dues to the 1989 earthquake. Jimmie stayed afloat by giving parties at Clancy's until he could make his move to the present location, 1731 San Pablo Ave., Oakland, CA. Jimmie opened the club where he's presently located at 1731 San Pablo Ave., Oakland, CA in 1990. In 1956, Jimmie was a promoter promoting groups in the Bay Area. He's had various entertainers such as Bobbie Blue Bland, Denise LaSalle, Barbara Lynn, Jimmy McCracklin, Jesse James, Solomon Burke, Dramatics, Bobby Rush, Johnny Guitar Watson, Marvin Holmes, Buddy Ace, Jackie Ivory and many Jazz groups. He changed the name of the Club from 'Jimmie's' to Jimmie's Grown Folks Club', then to 'Jimmie's Entertainment Complex'. He's known for serving a lot of food to his customers because as he puts it, 'I like to see people happy' Marvin Holmes told Jimmie that he's always doing things for people, so he wanted to do something for him. Marvin convinced Jimmie to do a CD. 'That was my first CD, but not my last', says Jimmie. This is the first DVD with many more to follow. Jimmie plans to retire soon and enjoy life.

Here's what you say about
I Still Got It.