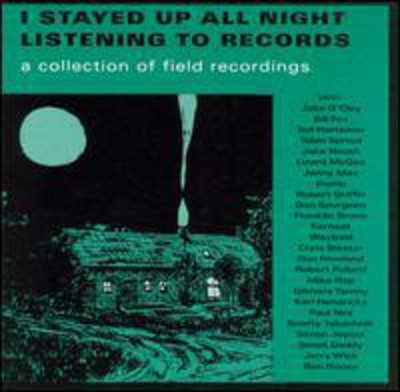 Compiled by the fine folks (namely Bela Koe-Krompecher) at Columbus, OH's Anyway Records, I Stayed up All Night Listening to Records is a collection of songs by primarily Ohio artists. The catch is that the artists had to play all of the instruments themselves, and, for the most part, it was recorded by the performers themselves. This truly do-it-yourself setup proves to be the catalyst for some of the most interesting and inspired tracks many of these artists have ever presented. While such various-artists affairs often tend to feel disjointed and ill-planned, by and large I Stayed up All Night Listening to Records avoids that trap and instead has the feel of a rediscovered favorite mix tape, one that truly merits staying up all night to listen to. While I Stayed up All Night opens on an odd but interesting note with Flipping Hades/ex-Clay member Jake O'Clay's bitter, cartoonish "Alphabet Pirate," the overall feel of the album first comes to light with track number two, as Bill Fox (the Mice) presents listeners with his raspy Tobin Sprout-flavored gem "Eclectrocution." Simple, honest, and gorgeously heartfelt, "Eclectrocution" is late-night Midwestern acoustic pop, and Fox sets a high standard for the rest of the album to compete with; happily, the remaining performers do a stunning job. Over the course of I Stayed Up's 25 tracks, three-fourths of Moviola offer strong solo tracks, the most striking being Jake Housh's "Testament." Earwig frontman/Lizard Family Music honcho Lizard McGee contributes a vocally heart-wrenching, if musically lackluster take on "Cinema East," while Robert Griffin (Prisonshake, Scat Records) turns in one of the album's highlight performances, also one of the more electric tracks, with "Dream King." Mysteriously listed as playing "bass in a very good Hoboken band" and having released material on the Brinkman label, the artist known as Dump is actually Yo la Tengo's James McNew. Secret identity aside, Dump's "It's Not Awight" is a charming round of layered acoustic and electric guitars (not too far removed from the experimentation normally associated with that Hoboken outfit). Subtle percussion is driven by vocals that are quiet, pleasant, and mixed into the song as though they are simply another instrument, rather than being placed starkly atop the guitars. Nothing Painted Blue's Franklin Bruno goes the singer/guitarist route with the understated "Shooting Past Me," which calls to mind, in addition to his own band, a gorgeous blend of the quiet, acoustic moments of groups like Cracker and the Lemonheads. It wouldn't be an Ohio compilation without appearances from members of Guided by Voices (since half the musicians in Ohio have been in that band), and several members happily oblige. For his part, Tobin Sprout's "Cryptic Shapes" is among the best songs he has ever written, which is truly saying something. In fact, the stark and lonely yet poppy and uplifting "Cryptic Shapes" alone makes I Stayed up All Night worth tracking down, even for those who wouldn't necessarily consider themselves obsessive Sprout collectors. Twelve songs later, Robert Pollard offers up "As Long As a Block Is Black," which is also available on Tonics and Twisted Chasers. Dark, moody, strong, and simple, Pollard's acoustic turn is pleasantly straightforward (though you almost expect it to momentarily explode into typical Pollard experimentation and deconstruction). The playful and fuzzy Pulsars-tinged rocker "Straight to Neil" is attributed to Earnest, who is credited as having played in Guided by Voices. For those keeping score, Earnest also goes by the name Nick Scholl. Earnest's song is a nice segue into Waybald's (aka Jovac Karcic of Gaunt) super-fuzzy guitar rock of "Song." However, before things start to seem at all predictable, Chris Biester (Appalachian Death Ride) presents the dark, backwoodsy, banjo-accented drawl of "Cool.