Crazy Mary - Im Not Going to Stop Touching It 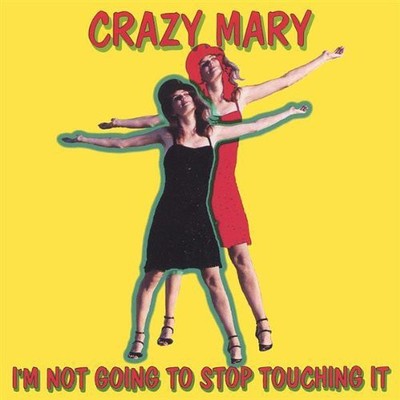 In most cases CRAZY MARY is some insane woman at the center of a deranged folklore. In this case, CRAZY MARY is guitarist CHARLES KIBEL, drummer NICK RAISZ and vocalist SOPHIA JACKSON, and new bassist ARMAND MILLETARI. Formed in 1998, CRAZY MARY have been become cult favorites of the New York City music scene. CRAZY MARY's last three LPs., KNUCKLEHEAD (2002), BURNING INTO THE SPIRIT WORLD (2001) and SHE COMES IN WAVES (1999) were favorites of college radio. Each held top 30 spots on over 30 radio stations and was played on over 350 stations nationally. SHE COMES IN WAVES was top 20 in the nation of CD's added to college radio playlists the week it was released (as reported to CMJ). CRAZY MARY's music has been played on legendary DJ, Vin Scelsa's Idiot's Delight and Spin College Radio's nationally syndicated show. Being fond of experimentation, CRAZY MARY released some wild, psychedelic dub mixes of cuts from WAVES and the band's first record, PASSION PIT (1998), on 2000's ASTRONAUT DUBS. In the spirit of ASTRONAUT DUBS but with a much more polished result, the band is proud of their latest release, I'M NOT GOING TO STOP TOUCHING IT (2003). This record contains 5 digitally remixed songs from the last two records. The final mixes were much more powerful than the originals and contain some weird experimental effects as well. Accolades include BEST rock album by a group in 2001 (SPIRIT WORLD) and best alternative heatseeker track in the April of 2003 ('Brian Jones' from KNUCKLEHEAD) as voted by New Century Productions. Nefarious Entertainment Magazine's voted us band of the month in the spring of 2001). CRAZY MARY was selected as a showcase band for NEMO 99 (New England Music Organization). Favorable reviews of the band have been published in The New Yorker, The Boston Globe, The Village Voice, and The Daily News as well as in numerous music publications. Music critic Ben Ohmart says, 'Crazy Mary is like that Wonderful Brown Sauce you see entrusted to Chinese menus. You're not sure what the hell's in it, but it's a singularly strange, exotic and at times full moon taste that's hard to take a doggie bag on.' Sadly founding member, bassist George Kerezman, passed away this March. As hard as it was to lose such an amazing classically trained musician, it was much harder losing our friend. George used to say to us (which is eerie in retrospect), if anything ever happens to me give Armand a call so CRAZY MARY entrusted the bass to his lifelong friend, Armand Milletari. Armand talks a lot more than George (which we thought might be a problem already having one member of the band, Nick, who talks a lot), but everything worked out great. One benefit of Armand, The Wizard of Fort Lee, is that he can expound on everything form sound engineering to vitamin C to proper ear maintenance, if you don't mind listening for an hour long explanation CRAZY MARY has recently been collaborating with avant-garde violinist, WALTER STEDING. Chris Stein introduced him to the band. Walter was a fixture at CBGB's in the 70's, has recorded with Robert Fripp, and Jim Carroll among others and appeared on the soundtrack to the John Waters movie Polyester, but is perhaps more famous for being Andy Warhol's painting assistant. Walter first performed with the band on KNUCKLEHEAD, but has since been performing live with the band in New York City and surrounds. A documentary about Steding for Swiss television captured footage of Walter playing with CRAZY MARY at Meow Mix in December of 2002.

Here's what you say about
Crazy Mary - Im Not Going to Stop Touching It.