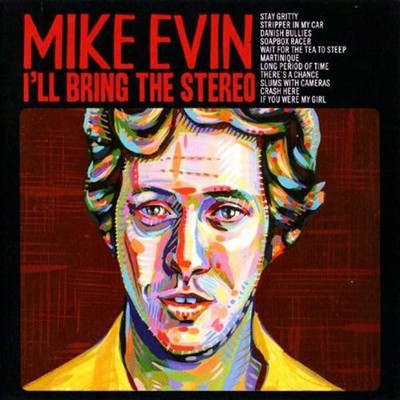 Mike Evin is a Montreal-raised piano man who has been listening to and playing music from a young age. Growing up in Hampstead, going to camp and to the country house, Mike listened to artists like Billy Joel, the Beach Boys, the Beatles, the Bee Gees, and Paul Simon. His poppy and playful songs reflect his love for harmony, melody and storytelling. Mike met former Barenaked Lady Andy Creeggan through a mutual friend who gave Andy a copy of Mike's first album, THE JANUARY MUSE. After that, the two songwriters became friends and collaborators. Andy and his brother Jim Creeggan (Barenaked Ladies bassist) adopted both Mike and his music and became more than mentors to him-they joke about him being their first kid. The Brothers Creeggan didn't just feed Mike and offer him advice; they offerred to help him record his second album, I'LL BRING THE STEREO. Recorded at Jim's old house in Parkdale (Toronto) over the summer of 2004, the album features Barenaked Ladies' Tyler Stewart and Kevin Hearn, Kurt Swinghammer, Gary Breit, David Matheson, Rob Carli, Ian McLauchlan, as well as backup vocals by Toronto songwriter Danielle Duval. Mike, Jim & Andy, along with engineer Paul Forgues, headed down to Hollywood to mix the album with Jim Scott-who has also done mixing for songwriters like Tom Petty. I'LL BRING THE STEREO is superproduced; that is, it's chock full of sounds and ideas, and it covers a diverse range of genres, from Mike's signature ragtime rock, to funky stuff, to soft rootsy pop songs in the tradition of The Band and Neil Young. Post-recording, Mike found his number one touring companion, Beatrice, at a store in Toronto. Beatrice is a small upright piano (64 keys) and fits into a minivan or a station wagon. She's now an integral part of Mike's stage show and his sound. These days, if you go see Mike play a live show, he'll play songs from I'LL BRING THE STEREO and new songs as well, but he probably won't be touring with an eight piece band. Mike arrives at shows solo with Beatrice and plays songs in a way that you can really hear the song-the melody, the story, the music-in a stripped down yet full kind of way. He has recently moved to Toronto, and just finished working with Don Kerr (Ron Sexsmith, Peter Elkas) on LET'S SLOW IT DOWN, an EP of love songs.

Here's what you say about
Mike Evin - I'll Bring the Stereo.