Martin Kerr - I Know You're Out There 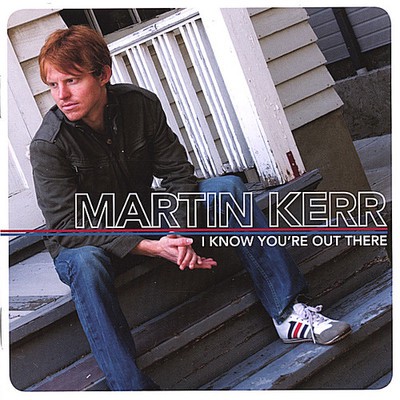 British singer-songwriter Martin Kerr explodes onto the North American music scene with this powerful, infectious, mind-altering album. Every song is lethally singable, yet full of buried treasures for the lyric lover, and sweet surprises for those bored by predictable pop. Just 24, and already traveled to 30 different countries, Martin Kerr is on tour and on a mission to plant his feel-good, think-better, cry-often songs into the minds and hearts of the masses. Biography: 'Took us all by storm', said the BBC, introducing Martin Kerr to 40 million listeners worldwide, when aged just 13. A decade later, his brand new album, 'I Know You're Out There' is garnering airplay and critical acclaim around the world. Featuring an all-star line-up of Canadian indie talent, the powerful, roots-pop sound of this record drives home it's enduring messages. Kerr's songs contrast youthful hope against his struggle with the status-quo, all delivered with a sardonic sense of humor, as we hear in the album's opening line:'This one's for the Undiscovered Geniuses, or is it genii? I never knew...'. Kerr explains: 'When I was traveling round the world, I found that there were so many incredible people with great talents going completely unnoticed. I developed this bizarre ambition to write world-famous song that discredits the whole idea of stardom. That's what 'Undiscovered Geniuses' is about.' 'I'm hoping it'll get played in supermarkets, and prompt people to talk to each other in the queue, rather than gawking at those awful magazine racks...' For 3 years Martin lived in China, where he learned to speak Mandarin, worked as a preschool teacher and recorded 3 albums of songs for children. 'I think music is a perfect vehicle for bringing fun, inspiration and good ideas to children. But I've found that you don't have to write 'children's music' to reach them. So now I'm focusing on doing music that I love, and sharing it with all ages.' 'Since I was 5 or so, the music that always connected with me is stuff that comes over as really sincere, people like Tracy Chapman, Bill Withers, and more recently Jack Johnson and Jeff Buckley .' 'But I've also memorized the scripts to far too many British comedy shows, like Blackadder and Red Dwarf. So more often than not a joke or two slips into my otherwise serious songs...' As an 18-year-old backpacker in China, Kerr met his future-wife, a Canadian. 5 years of traveling and many love-letters later, they settled together in Edmonton. 'I've been writing a lot about marriage, which isn't all that common a topic for pop-songs. There seem to be plenty about one-night stands, but not many good ones about staying together forever, at least not that have much interesting to say. So that's the motivation for songs like 'My Love's Been More Than Two Hours Long' and 'Kryptonite Anniversary'.' If his latest disc receives the kind of attention it deserves, this British lad may find himself going steady with the North American public.

Here's what you say about
Martin Kerr - I Know You're Out There.