Brian Nova - I Could Have Told You 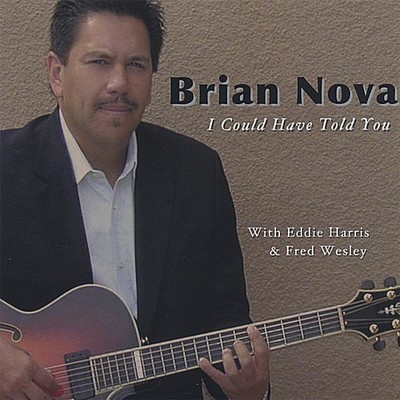 Nova swings again on his new CD, I Could Have Told You. In addition to new recordings, Nova pulled three recordings from his vault of guest artists he has recorded with over the years: "Day by Day" and "I Love You" with the amazing Eddie Harris, and "Secret Love" with Fred Wesley. It doesn't get any better than these great horn players mixing it up with Nova's Guitar! In addition, Nova has released his original tune "Where's Buddy?", a tune dedicated to his dear friend Buddy Catlett. Enjoy the beautiful technique and artistry of Brian Nova's Jazz guitar and vocals on I Could Have Told You. The Musicians: Brian Nova on Guitar. Brian has played on numerous recordings and has toured with same great Jazz artists. Artists such as Joe Pass, Herb Ellis, Charlie Byrd, Eddie Harris, Stanley Turrentine, Harry "Sweets" Edison, Jeff Hamilton, Fred Wesley, Ernestine Anderson, Diane Schuur, Freddie Cole, and Blues and Rock Legends Charlie Musselwhite and Steve Miller (just to name a few). Nova not only records but tours extensively throughout North America, Europe, Japan and China. And just as his mentors nurtured his skills, he takes the time to conduct master guitar clinics at Universities and while on tour. Eddie Harris on Tenor Sax. The incomparable Sax player! Fred Wesley on Trombone. The legendary Fred. Buddy Catlett on Bass. This Jazz legend began his career touring with Quincy Jones. He spent time with the Count Basie Orchestra and can be heard on the famous recordings of Frank Sinatra with the Count Basie Orchestra such as "Fly Me to the Moon". He then toured and recorded with the legendary Louis Armstrong and can be heard on recordings such as "What a Wonderful World". Dan O'Brien on Bass. Dan has played with George Russell, Sam Rivers, and John Medeski. Greg Williamson on Drums. Greg has played with many great artists including Ernestine Anderson and the Woody Herman Orchestra. Larry Vincent Jones on Drums. Primo Kim on Piano. A Seattle favorite Jazz artist and good friend. Quotes from great players: " I feel Brian is one of the finest jazz guitarists on the scene!" - Joe Pass "Brian is one of my favorite duet partners. He goes for the groove." - Red Mitchell "He is a true pleasure to play with. He's my Man!" - Herb Ellis.

Here's what you say about
Brian Nova - I Could Have Told You.