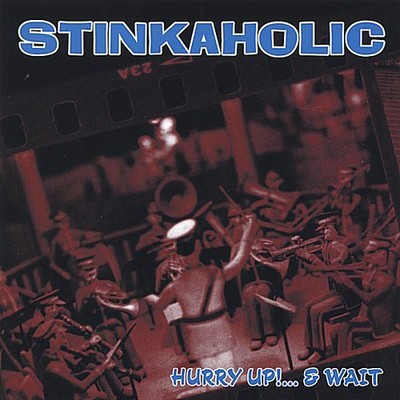 ...In 1994, in Oakhurst, CA, Stinkaholic was born. Bodie Shaw, a friend, took his interpretation of the music along with the name of the band and developed a cartoon world of characters, which integrated itself into the sound, style and performance of the band. Stinkaholic's first demo tape, 'No Shower', was recorded in 1994 and featured a low-fi-poppy punk-hoo haw sound. Almost a year later, Stinkaholic recorded 'Stinkies Pals', but shortly thereafter the recording was done, they lost their bassist, TJ McGee. Having played together previously, the decision was now very simple...the best man for the job was Neil's brother Andy. The band and Dave Platfoot soon released Stinkies Pals. They then littered California to the best of their ability with the CD and because of doing this, started to get some attention throughout the state, they decided to move down to San Diego to get more exposure. About two years later, in 1996, 206 Records picked up Stinkaholic. They then went into the recording studio and soon released 'Melee', 13 tracks of ska, punk and some spacey groove material. Shows were played in support of the album, and sales were good. Later, 206 Records decided not to continue with the label and that was around the same time that DoughMain & Stinkaholic met. Stinkaholic added 3 keyboards and Jake Mendez to the band, then soon later signed with DoughMain Records. The addition of the keyboards added a cartoon-theatrical-punk flavor to the show, which explains the costumes, fog, and strobe lights used during their shows (circa 1999). 'Pantomime' was recorded and released by DoughMain Records in 1999,(soon to be remixed and mastered 2004). This sound and album was experimentally done by the band and is not the style they continue to play. About a year after the release of Pantomime, Jake and John both left the band. This left Andy and Neil without a drummer, until Steve Lembke decided to take on the role. With the new changes, Stinkaholic went back into the studio and recorded a few new songs for an upcoming compilation on DoughMain Records. The new sound coming from these guys is awesome. So awesome in fact, it inspired DoughMain Records to have a music video filmed for 'Feel The Pain' and to record a new full length, 'Hurry Up!...& Wait', released Sept 17th 2002. Stinkaholic has been playing various clubs in support of the album and also was chosen from Ernie Ball Battle of the Bands and appeared at the 2003 Van's Warped Tour. ...Always working on music, always pressing forward! * Stinkaholic and Platfoot has opened for and booked/promoted shows with Blink 182, Good Riddance, Guttermouth, Buck-O-Nine, Skankin' Pickle, Fifteen, Strung Out, MxPx, and many more... * Andy Platfoot is also involved with other projects (FM REVOLVER; BUCK-O-NINE.) 1994. 'No Shower' (demo) 1995.' Stinkies Pals' 1996-97. EP sessions &' Melee' 1999. 'Pantomime' 2002. 'Feel The Pain' (Music Video) 2002. 'Hurry Up! & Wait'

Here's what you say about
Stinkaholic - Hurry Up!& Wait.