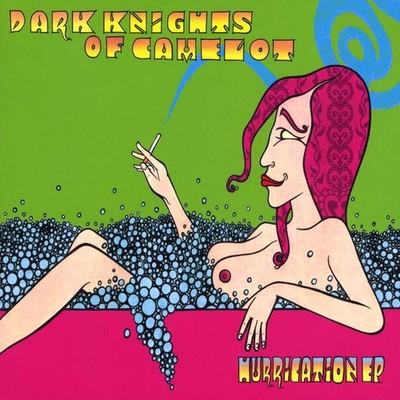 When the Dark Knights of Camelot perform, they seek to create music with the grit and raw emotion that has fallen through the cracks of the commercialism of modern music, says the band's bass player, Harry Crumpler III. Comprised of lead vocalist and guitarist Ben Shea, Crumpler (who also contributes vocals and keyboards), and drummer Simon Davenport, this Hattiesburg, Mississippi group have released their debut -"Hurrication EP"- through Olympic Records, an independent label based in Jackson, Mississippi. "Through heavy touring, five songs became staples of our live show. As a result, we recorded them live in the studio," said Crumpler. "This EP demonstrates our wide and varied arsenal. The finished product surpassed all of our expectations." In describing their style, Crumpler acknowledged, "Being a Southern band, you can't avoid the rich musical history that stems from around us." However, due to a broad spectrum of musical influences, Dark Knights of Camelot is not just another Southern rock band. Smashing Pumpkins, Dave Grohl, Led Zeppelin, The Beatles, 1990s grunge, '60s and '70s psychedelic are a few that top Shea's list. Crumpler adds John Coltrane, This Orange Four, The Griffenz, R.L. Burnside,Carey Hudson and Blue Mountain, and A Tribe Called Quest as some favorites. Davenport includes New Orleans-based Papa Grows Funk, Outkast, Jurassic 5, The Roots, White Stripes and Nirvana among his influences. The group originally formed in 2006 when Shea and a childhood friend began recording melodic, melancholy rocking songs. Over the next couple of years, Shea played on and off behind the name Dark Knights of Camelot with a rotating cast of band mates. One of them was bassist Harry Crumpler III. After working on a few songs, Crumpler and Shea found that they had a great musical connection and the bassist became a permanent member of the band in mid-2008. "With Harry's presence, the older songs began to take on newer, more ambitious identities," said Shea. Shea then sought out Davenport - a friend he'd jammed with years earlier. "I called Simon in the summer of 2008 to see if he wanted to be Dark Knights of Camelot's full time drummer," Shea continued. "He was actually traveling and playing music all over the country at the time and enrolled at the University of Southern Mississippi on a full music scholarship." Shea remembers Davenport's first reaction. "He initially declined the offer," he said. "I remember feeling discouraged and confused with what our next move was to be. Our options for a serious drummer were slim." A day later, Davenport had a change of heart. 'It took some time to get used to the idea of dropping out of school and ditching a scholarship I'd worked really hard for, but there isn't a substitute for doing what you love,' Davenport explained. "Simon Davenport is everything we hoped for in a drummer and band mate and much, much more," Shea declared. "Since then, we have done two major tours throughout the Southeastern United States and are now releasing our first collection of songs." The group writes all of their songs, with Shea bringing the initial idea and the lyrics while Crumpler and Davenport contribute by adding more structure to them. "We try to get a song to where we are happy enough to play it live and then use that as yet another filtering process to get it to where we want it," Crumpler stated. As part of the promotion of their new "Hurrication EP", in March 2009 the trio embarked upon a two-month, 50-show tour that will take them through Mississippi, Tennessee, Georgia, North Carolina, Delaware, Pennsylvania, New York, Rhode Island, Connecticut, Massachusetts, Vermont, Quebec and Ontario (Canada), New Jersey, Ohio, Kentucky, Oklahoma, Texas and Louisiana. Known for commonly scheduling prolonged 4 am practice sessions, the dedication and energy that this rising band devotes to it's musical quest is only matched by what it delivers during it's enthusiastically received performances. Over the weeks and months ahead, expect Dark Knights of Camelot to be coming your way, both live and over the airwaves, as an ever-widening audience falls under it's irresistible sway.

Here's what you say about
Dark Knights of Camelot - Hurrication EP.