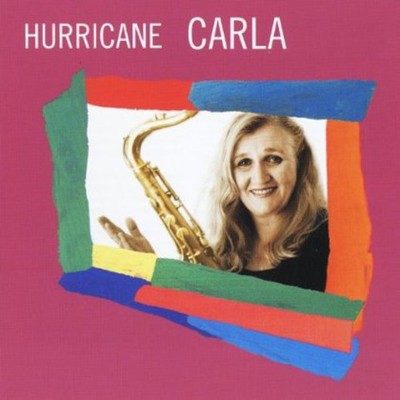 Hurricane Carla (Carla Brownlee) does it the old fashioned way. With a big 50's tenor sax sound, and punchy, sexy, and sometimes comical vocals, she'll make you want to play this album again and again. She takes her cue from the likes of Sam 'The Man' Taylor, King Curtis, Lee Allen, Sam Butera, and other 50's greats and puts it together in her own way. And her vocal stylings recalls Billie Holiday and Peggy Lee. Recorded with special attention at Wave Lab Studios and produced by Steve Grams, the warm sounds of authentic vintage microphones and recording gear, and old-style recording techniques will make you think you're listening to an old 'Blue Note' record. This album contains some original songs by Carla, including Crazy Harry (a sensual tango), Cannonball (a Big Joe Turner-type rockin' blues), Moe Facky (a New Orleans style rocker), and Bluebeard (a Dixieland style cautionary tale about marrying for money). Hurricane Carla was inducted into the Arizona Blues Hall of Fame in 2002. ABHOF is a non-profit organization that educates the public about blues music and culture in Arizona and honors musicians and others who have made a substantial contribution to that effort. Carla spent the 80's based in New York City. She toured nationally with Jonathan Richman and the Modern Lovers, and in the US and Europe with Dan Hartman's 'I Can Dream About You' tour. TV appearances with Hartman included Soul Train, Solid Gold, American Bandstand and Late Night with David Letterman. Hurricane Carla also made guest appearances with popular bands including the Violent Femmes, Ben Vaughn Combo, the Morels and Skeletons, the Del Lords, Syd Straw, and John Sex. Since moving to Tucson in 1993 she's been a member of Tony and the Torpedoes, Kings of Pleasure, the Lisa Otey Band and the Carnivaleros. In November 1997 she joined blues shouter Nappy Brown for a series of Eastern European Blues festivals, and in 2001 and 2002 she played and sang with Lisa Otey at the Cognac Blues and Blues sur Seine Festivals in Paris. Artists who recorded with Carla on this album include: Elise Ackermann, Linda Ackermann, Steve Grams, Brendan Kearney, Danny Krieger, Marx B. Loeb III, Gary Mackender, Blake Matthies, Richard Medek, Teddy Morgan, Lisa Otey, Eric-Jan Overbeek (Mr. Boogie Woogie), Cass Preston, Chip Ritter, Craig Schumacher, Daniel 'Sly' Slipetsky, and John Westfall.

Here's what you say about
Carla Brownlee - Hurricane Carla.