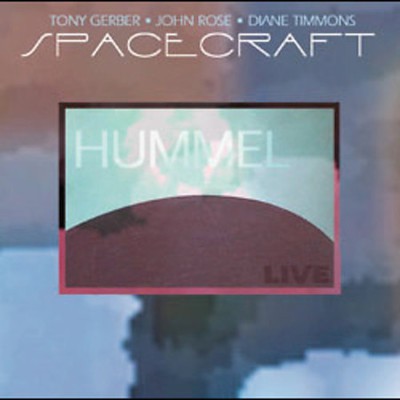 BILLBOARD MAGAZINE: SPACECRAFT Hummel Producers: Spacecraft Lektronic Soundscapes 1012 Spacecraft sets the controls for deep space with music recorded live in the Hummel Planetarium in Kentucky. This trio of synthesizers and guitar recalls early - '70s Tangerine Dream, when that group was still using live performances as free-form explorations rather than pre-programmed computations. Befitting the planetarium environment, this is music more of design than melody, and it has a pulse more than a rhythm. From the amorphous textures of 'Explorations In Space' to the tugging sequencer patterns of the title track, sounds and forms shift and morph through each other, gradually revealing broad chordal structures, gentle pulses, and the interlocking patterns that have long been the hallmark of space music. Spacecraft does it better than many contemporary practitioneers, and Tony Gerber's sinuous guitar leads add another dimension to this sound. John Diliberto (Billboard Magazine) SPACECRAFT: Hummel (CD on Lektronic Soundscapes) Recorded in the Hummel Planetarium at Eastern Kentucky University in 1998, this 69-minute CD captures the wonderful airs of Spacecraft's free-forming, flowing live performance. While the band played their atmospheric electronics, their music directed the movements of laser light refracting across the Planetarium's evocative dome. These pleasantly languid auralscapes are tinged with delicate keyboards, comfortably paced to inject melody to the slowbuilding tonalities. Balanced between minimal and demonstrative, this music oozes in the air, like a benevolent swarm of electric bees. The synthesizers are focused on generating an aura of placid tension with their purring growl. Ethereal textures are everywhere, like intangible windstorms seen in the distance. Fragile keyboard riffs manifest to stir the cosmic mists with their sonic guidance. Guitar effects and heavenly choral vocals creep into the mix, adding depth to the liquid electronics. In fact, their presence in the music is often cleverly hidden by their otherworldly nature; the guitar in particular employing a very vaporous sound. Although the primary use of voice is restricted to choral pitches, one track does feature lyrical vocals (in Latin). This music's sense of awe swells with an invigorating harmonic power. The mellow cosmic soundscape becomes enlivened with agreeable currents of euphony. SPACECRAFT: HUMMEL - 5 star Amazon.com The Best Tangerine Dream Album Never Made By TD, April 30, 2000 Reviewer: Paul Allaer from Cincinnati I first heard a track from the 'Hummel' album on the 'Echoes' late night program on NPR and immediately knew I had fallen on a gem. As a big fan of Tangerine Dream era '73-'77, I keep hoping to come across more albums that display the same unique sound of 'deep space' made legendary by TD (think 'Ricochet', 'Rubycon', 'Encore'). Well, look no further. 'Hummel' is as good as, if not better, than anything TD ever put out. Clearly, the 'Hummel' album is a loving tribute by Spacecraft to TD. Spacecraft uses the same deep pulses, synthesizers and screetching guitar solos to create 70 minutes of the best TD music you'll ever hear. Tony Gerber, John Rose, Diane Timmons: Hummel (LIVE) (CD, 69:04); This live recording at Eastern Kentucky University's Hummel Planetarium captures the music reflecting and directing laser light refracting within the sky-vault dome. Those of us fortunate enough to have come across Tony Gerber's Blue Western Sky will hear a strong echo of that earlier work here. Joining Gerber is John Rose and Diane Timmons on synthesizers. And going a delightful step further we have Timmons' angelic, wordless choir vocals adding an ethereal human dimension There is a definite Tangerine Dream sequenced Tangram structure to 'The Summon' which comes off quite well. 'Explorations In Space' is more of a Jonn Serrie/Steve Roach thing but evokes strongly the darker galactic atmospherics of Spacecraft, another Gerber, Rose, Timmons, et al project. 'Galileo' returns to a sequenced T. Dream/ Kitaro snippet. 'Hummel', the title track opens with phased cosmic winds and a very Edgar Froese solo feel. I heard Aqua, Stuntman, and even that T. Dream classic, Rubycon. This is a great track, letting one hear what Tangerine Dream could be doing if they weren't noodling around doing dance mixes or worse. Gerber adds guitar in this track's outro. 'Dialogues of Energy' is a percussive, ethnic-tribal, chime-vibes, Water Music-ish piece with Nik Tyndall tendencies that is a nice rhythmic change-of-pace. A bit of Peter Buffet piano is woven into the crystalline passages. 'Astrollenium' crawls all over you in the thick heaviness of a droning, resonant mass. Gerber solos on an overdriven, infinite-sustain guitar. The effects on your head with this one are near maddening with delight. When you think you can stand no more ecstasy, Timmons' lilting and haunting voice peels away another layer of your spinal column. This is the light-at-the-end-of-the-tunnel. Timmons' voice is like a riding out a positive NDE. 'Oh man, this is good!' We are treated to more of Timmons on 'De Profundis' as she chant-sings in Latin, a psalm to the reigning King of the Universe, Jehovah God, Yahweh of Israel. Beautiful synth keys accompany her in a David Lanz, Peter Buffet, T. Dream style with the slightest touch of reggae mixed with a sombre Middle Eastern flair. Very nice. I'll save the last track, 'Domes of Light' for you to experience without any of my opinion. Enjoy! This is a wonderful way to experience ambience and electronic music. I heartily recommend this offering. Folks, this is a must-have. ~ John W. Patterson Eclectic Earwig Reviews: Progressive Rock and Beyond.

Here's what you say about
Spacecraft - Hummel.