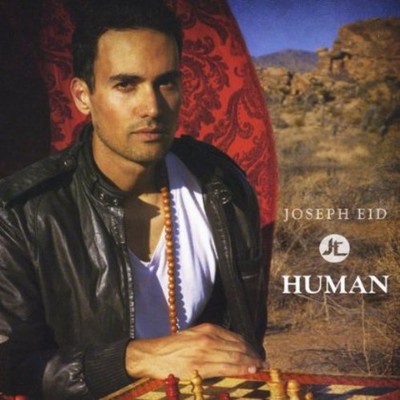 Americana-Folk Singer/Songwriter Joseph Eid has announced the release of his first full studio, Human, on November 19th. Recommended if you like the Avett Brothers and Ray Lamontagne, Eid has been garnering considerable buzz with his music, recently being named as one of the 100 Hottest Live Unsigned Artists of 2012. The album's title track 'Human', displays the pastoral beauty, delicate guitar work, and intricate but relatable lyrics that have become Eid's trademark. "Human" seamlessly blends sharp, melodic pop lyricism with traditional folk sensibilities evoking folk troubadours both past and present . The album's first single "Ready Now", is propelled by a driving rhythm section, lush instrumentation and an instantly unforgettable hook. Originally born in Liberia, Joseph Eid grew up in the suburbs of New York City, eventually moving to Los Angeles. Eid realized his passion for songwriting while playing an open mic in 2007. He began working with world-renowned guitarist/songwriter David Lamar shortly after, honing his songwriting at weekly showcases at the Stone Bar, leading the prolific singer/songwriter to write over 30 new songs as well as record his Debut EP Cardiac Output. Known as a dynamic solo performer, Joseph Eid has brought his cathartic one-man live show to many of Los Angeles' premier music venues, including stints at Room 5, The Mint, and the Viper Room. He enjoyed 3 Hollywood residencies at The Stone Bar, Crane's Hollywood Tavern, and Bar Lubitsch. He has toured in Northern California, Oregon, and Washington, playing pubs, festivals, and house concerts. He is excited to be playing his first show in Manhattan in December 2013. The concert will be part of the 'Live from Home Benefit Concerts' at the Bookstore Cafe in Soho. Joseph is honored to be playing this spot which as hosted some of his favorite artists. He is looking forward to seeing the faces of his New York family and friends in the audience and plans to play more shows on the east coast in 2014. PRESS: "One of the Hottest Live Unsigned Artists of 2012" - Music Connection Magazine (Dec 01, 2012) "Joseph Eid has been welcomed as one of the best up and coming singer songwriters that has appeared in my bar. To be able to see him playing new songs and developing of the last 2 years is a pleasure'" - Carl Percival (retired singer, guitarist, harmonica & banjo player for 45 years), The Stone Bar, Hollywood, CA 'He breaths life into the song until it becomes an entity of it's own. First you get hit with his Stunning good looks when he walks on stage. Then he picks up the guitar and crones out a love song drawing you in with vocals that are smooth as silk complimenting the melody while melting perfectly into the uniquely styled guitarmanship. Joseph Eid is the WHOLE Package!!!! Dori Donoho, Clear 101.7fm, Bend, OR "Eid strums his own affecting blend of earnest folk tunes." - Julian Hooper, Flavropill "Such a talent. . ." - Derek Rath (Host of KPFK's Global Village Mondays), Joseph Eid Fan Page "If you're considering hiring him, or working with him, I stake my good name that you won't be disappointed." - David Lamar, internationally renowned guitarist/singer,songwriter/teacher, Joseph Eid Biography "One very talented writer and performer- there was NO way to miss that screening these songs. Keep up the amazing work- and if you ask me- I can totally hear why you make the move from medicine to music!" - Taxi A&R Department, TAXI MUSIC "The amazingly talented Joseph Eid was playing guitar, creating the perfect happy atmosphere. (To all my lovely brides who might be looking for a guitarist to play at their wedding, don't even think twice! Joseph is amazing!)" - Karina Pires, Los Angeles Wedding Photographer (Karina Pires Photography) 'Cardiac Output' is powerful and inspiring. Joseph brings such authenticity and sincerity into his music. I'm learning as I listen and I'm soothed. - C.C Treadway, spiritual healer, itunes album review.

Here's what you say about
Joseph Eid - Human.